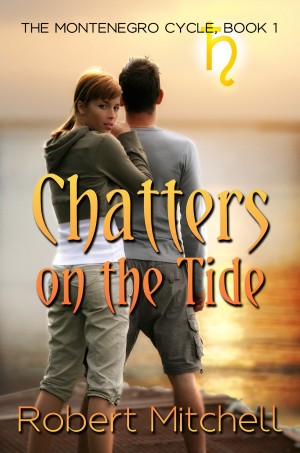 Chatters on the Tide

By Robert Mitchell, Jr
Harold has lost his job, divorce is on the horizon, a religious cult believes he's a prophet, and he's being stalked by an eerie motorcycle club and its mute, wild-haired mascot named Gator. His skeptical wife Bonnie is fighting to free him from the strange world into which he has fallen while Harold struggles with bizarre and unusual revelations. Is he really a prophet with miraculous powers? More
Virginia's Chesapeake Bay area is the backdrop for the story of Harold, a troubled young professional, and his smart, determined wife Bonnie. On the verge of divorce, the young couple is caught between growing financial problems, a religious cult that believes Harold is a prophet, and an eerie motorcycle club with a mute, wild-haired mascot named Gator. Skeptical Bonnie fights to free her husband from the strange world into which he as fallen while Harold struggles with bizarre happenings and unusual revelations that just may prove he really is a prophet with miraculous powers.
Download: epub mobi (Kindle) pdf more Online Reader
rtf lrf pdb txt
Price: Free! USD
Add to Library
Create Widget
Tags: occult cult supernatural divorce prophet eerie slipstream motorcycle club classic rock
About Robert Mitchell, Jr

Robert Mitchell is a writer, martial arts expert, and archdeacon in the Old Catholic tradition from Richmond, VA. A martial artist for over thirty years, he is the founder of Heritage Arts Inc., a 501(c)(3) federally-recognized non-profit educational charity providing free instruction in martial arts, fitness, outdoor skills, and spiritual development. In 2011 he was awarded the rank of Master by the Combat Martial Arts Practitioners Association, and in 2019 became an authorized instructor of Mark Hatmaker's Frontier Rough & Tumble Martial arts program.

On the subject of martial arts and related topics he has penned "Martial Grit: Real Fighting Fitness on a Budget" and "The Calisthenics Codex" which has been in Smashword's Top 10 fitness books since its publication in 2015. His fiction works include the novels "Chatters on the Tide," "Ghilan" and "The 14th Mansion," as well as numerous poems, ‘zines, comic books, and short pieces. His work has appeared in the Journal of Asian Martial Arts, Hulltown 360 Literary Journal, and more.

Also in Series: The Montenegro Cycle

Reviews of Chatters on the Tide by Robert Mitchell, Jr