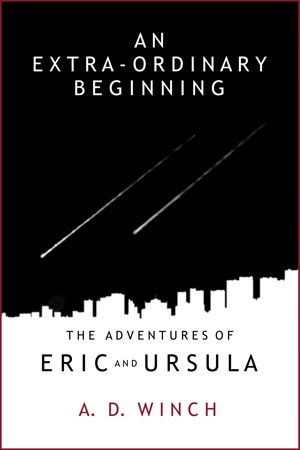 Over sixty years later two unique children from very different backgrounds discover they have abilities far beyond the ordinary. Only a secret US agency knows why.

The children, Eric and Ursula, embark on an exciting journey to find the answers. Answers that lie in old space debris scattered across Europe.

Their every move is monitored and a deadly game of cat and mouse begins. Will they find the secrets to their shared past? Or will the agency find them first?
Download: epub mobi (Kindle) pdf more Online Reader
rtf lrf pdb txt
Price: Free! USD
Add to Library
Create Widget
Tags: adventure children spies secret ufo alien super winch
About A.D. Winch

I’m the author of the ‘Adventures of Eric and Ursula’. Over the last 18 years, I have lived near Dracula's castle in Transylvania, war-torn Sri Lanka and above the Hadron Collider in Geneva. Currently, I live in Prague, not far from a space rocket covered in giant babies.

I wrote ‘An Extra-Ordinary Beginning’ while waiting for the birth of my son. I have also written, and directed, plays for children around the world. For an older audience, I wrote the films ‘Seagulls’ which was shown at the Brighton Film Festival and ‘your baby disappeared’ which premiered in Prague in 2011.

When I am not writing I enjoy spending time with my family, cycling, watching movies, listening to comedy and being creative.

Trailer
The trailer for 'An Extra-Ordinary Beginning'. The exciting first book in 'The Adventures of Eric and Ursula' series.

Reviews of An Extra-Ordinary Beginning by A.D. Winch

You have subscribed to alerts for A.D. Winch.

You have been added to A.D. Winch's favorite list.

You can also sign-up to receive email notifications whenever A.D. Winch releases a new book.