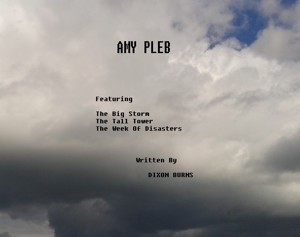 By Dixon Burns
Three different stories which find a young girl called Amy facing her fear of storms, thinking she is going to see a ghost and having a complete week of disasters. More
AMY PLEB
This book features three stories all based around the life of a girl called Amy Pleb.

The Big Storm
Amy Pleb is to anyone who knows her a normal 9 year old girl who lives in Cogan on the Fogan with her parents Calamity and Arthur. But Amy has an unnatural fear of storms. She has harboured this fear for as long as she can remember. She recalls it all starting when her father Arthur told her the story of the big storm he endured when he was a small boy. This had generated an interest in Amy which had turned into an obsession and then complete fear.
A few days before Amy’s birthday, although she doesn’t know it her worst fears are about to come true. The weatherman forecasts the worst storm ever is heading their way. Amy becomes distraught and retreats to her bedroom with her beloved cat Tilly in tow. But the skies don’t darken and the rain doesn’t start as predicted so Amy begins to relax believing the weatherman must have got it wrong.
But then out of nowhere a massive clap of thunder echoes around the village, the skies light up with lightning and the rain pours down. Amy thinks this is the end for her and her family.

The Tall Tower
Amy Pleb is going to stay with her Uncle Lawless in Fogan for a week. Near where her Uncle lives on the outskirts of Fogan is the Tall Tower, on a large hill surrounded on all sides by steep cliffs, the only access is up a series of some one hundred steps. Amy asks her Uncle if he will take her up there but he tells her no and that she is forbidden to go up there because it’s haunted.
Amy meets up with her friend Katie Bench who lives next door to her Uncle. Amy and Katie talk about many things but then start to talk about the Tall Tower. They decide to go for a walk and end up at the foot of the Tower. They notice a fence and a no trespassers sign and Amy is ready to turn round and go back but Katie jumps the fence and begins to climb the steps. Amy follows as she is worried for her friend. Once inside the Tower they see a huge door which is open. Katie being quite headstrong continues up into the Tower with a reluctant Amy behind her. Once inside they hear noises and become quite frightened and then a ghostly figure appears.
Amy is unable to tell her Uncle what has happened in the Tower as she knows she has betrayed his wishes. But before long events take a turn and she has to admit to him what she has done to save her friend.

The Week of Disasters
As every child knows sometimes in life things don’t go according to plan, it’s just one disaster after another. But for Amy she really does have a bad week.
It starts with a bad day at school, an awful grade, a telling off from the head teacher and a smelly class mate. She has a bad hair day, a spot that she cannot get rid of and has a fall out with her best friend over a boy. She tries to read a book but has interruption after interruption. Her parents threaten to ground her for good if she does not tidy her room. She meets up with a flatulent ferret, loses her new kitten and to top it all her dad falls off a ladder.
Download: epub mobi (Kindle) pdf more Online Reader
rtf lrf pdb txt
Price: Free! USD
Add to Library
Create Widget
Tags: childrens stories adventure stories
About Dixon Burns

Dixon Burns (Pen name) was born and brought up (or was it dragged up) in West Yorkshire, England. He worked in Textiles, the Mining Industry and is trained as a qualified Social Worker. He is married with a daughter.

His writing credits so far are two published childrens stories on Amazon - Amy Pleb. This is a trilogy of stories, which are The Big Storm, The Tall Tower and Amy's Week of Disasters. And Amy Pleb and The Secret Tree.

Dixon has been writing since the early 80's, and his work includes songs and short stories. But he claims that he often started writing these but rarely finished them. But when he got the idea for Amy Pleb, the inspiration came flooding in. He was prompted into writing a Children's story from a suggestion by his wife and Amy is inspired by his daughter.

Please read his Word from the Author at the beginning of Amy Pleb, which is a rather
amusing read.

He has written two more Stories again about Amy and they will be on sale next year. They are titled Amy Pleb and all the Ghosts and the Ghostsquel. He is currently writing a sequel to the Secret Tree and ideas for more stories about Amy are in the pipe line. Or that untidy mess he calls his brain.

The art work for the current book has been done by Dixon himself and as he points out as an artist he makes a fine Jockey. The Week of Disasters front cover was designed by his daughter. Lesson learnt the illustration for the Secret Tree were done by Jade Hodgson.

Dixon also maintains that not a word would have been written without the support, hard work, dedication and love from his family. 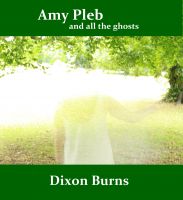 You have subscribed to alerts for Dixon Burns.

You have been added to Dixon Burns's favorite list.

You can also sign-up to receive email notifications whenever Dixon Burns releases a new book.