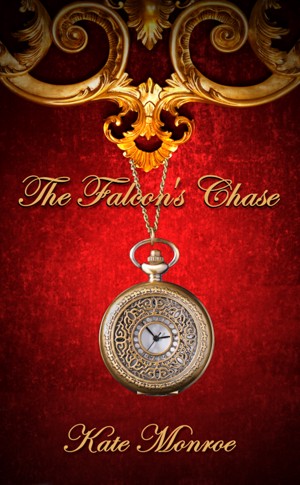 However, when they come to find their fates inextricably tangled in a plot that threatens the very foundations of British society, they are swept away on a chase that puts not only their lives, but their hearts at risk - and neither of them can defy the wild and stormy ride they find upon the Falcon.
Available ebook formats: epub mobi pdf rtf lrf pdb txt html
First 20% Sample: epub mobi (Kindle) lrf more Online Reader
pdb
Price: $3.99 USD
Buy Add to Library Give as a Gift
How gifting works
Create Widget
Tags: romance steampunk steampunk romance steampunk adventure
About Kate Monroe

Kate Monroe is a redheaded author and editor who lives in a quiet and inspirational corner of southern England. She has penchants for classic sci-fi, horror and loud guitars, and a fatal weakness for red wine. Her interests in writing range from horror to erotica, taking in historical romance, steampunk and tales of the paranormal on the way; whatever she dreamed about the night before is liable to find its way onto the page in some form or another…

Reviews of The Falcon's Chase by Kate Monroe

Review
Suzie Lockhart reviewed on March 30, 2013
(no rating)
Review for ‘THE FALCON’S CHASE’
By Kate Monroe

I have read quite a number of romance novels in my life, and there are only a few whose stories have remained with me. I must say, ‘THE FALCON’S CHASE’ by Kate Monroe will be one of those memorable books.
I was caught up in this steampunk romance from the very first page, and this whirlwind of an adventure never stopped. Starting with a jailbreak was a clever hook for the reader. Her main characters were engaging, and were supported by an entertaining entourage of pirates and villains. The retro futuristic elements were portrayed in such a vivid manner that made the airship and nanites appear authentic. Kate Monroe was able to skillfully portray this alternate British history combined with true factual elements. There were some masterfully crafted twists in this story that made ‘THE FALCON’S CHASE’ difficult to put down.
If you enjoy romance which takes your main characters through perilous situations, and a treacherous villain they must confront before they can truly be together, then you will enjoy Arianna and Rueben’s high sea…er, air, adventure!
Consider picking up a copy of ‘THE FALCON’S CHASE’. You won’t regret it.

(reviewed the day of purchase)
Shawn Micallef reviewed on Dec. 10, 2012

The Falcon's Chase is a book put out by Pink Pepper Press and is written by Kate Monroe. The book takes the reader into a steam punk world. The setting is Victoria England, with Queen Victoria being the ruler of the empire. An Empire that had men exploring the globe and due to raids on Spanish shipping they were labeled pirates. It is one of those pirates that we find at the center of the book.

Captain Reuben Costello, who is awaiting his execution, is suffering in one of the cells in the legendary Tower or London. He had let his lecherous ways lead to his capture as he was in bed with his latest mistress when the Royal Navy captured him. The chargers may not have been so severe to require his execution but here he is stuck behind the bars.

You can only imagine what must be going through the captain's mind as he waits for his execution. Frustration, anger, sorrow, and so much more must be crossing the mind of a man who had lost his freedom. The one thought that is brought into his mind quickly is lust. This is happens after hearing footsteps approach his cell he finds a beautiful woman being let into his cell. His first thoughts must be that she is there to give him a last meal. Instead after attempting to act on those original thoughts he finds that he is mistaken. This beautiful woman, Lady Arianne Dalton, is actually there to help him to escape. Her only request for committing this treason against the country is to get passage out of England.
This is the setup of The Falcon's Chase. A book that finds the good Captain so in love with the Lady he will do all he can to bed her. He loves her for her beauty and as he discovers more about her he begins to love her for the person she is. This is a woman he did not expect to find as she shows her worth to him, and his ship, throughout the book.

Lady Arianne herself finds the Captain to be a gruff man, but she does become fascinated with the man. As she learns more about him and what lead to his prosthetic arm she begins to have carnal feelings for the Captain. The two drive each other crazy, with the Captain consistently reminding the Lady she will be his before their travels are over.

The book has more to it than the constant sparing between these two main characters. The innuendoes, and eventual "joining" is well written by Monroe. The book adds another layer when there is found to be political intrigue involving a possible change that could impact the world they live in. This intrigue can be traced back to elements, family, and friends in England that lead to the Lady and the Captain returning to England.
Although this is set in Victoria England there are some more modern technologies that are used within these pages. The study of nanobots, and pirate ships that sail upon the wind and not the water are two main examples. The clothing is described and made to be fitting into the era the book is set. The Captain is also found to be a man who sees women not just as objects but ship mates as we find his crew to include women. This is something a bit refreshing for a book set in this era as often women are seen just as objects, and this is one reason Lady Arianne wishes to escape England at the beginning of the book.

The Falcon's Chase may not be for all readers due to some of its more adult passages. However, if you can allow yourself to read the book for its story and back plot you will find a book that fits this genre very well. It even has a hint of science fiction from the use of the nanobots. Of course one cannot forget about the political intrigue that is found within these pages.

The book is not heavy on the sex that I equated with a romance novel. Instead it is filled with innuendos and other adult situations that can get a reader's attention. The story is also one that fits into a great tale that has covered thousands of stories and years. A story that takes two people, from different worlds, and through adversity come together and find love.

You have subscribed to alerts for Kate Monroe.

You have been added to Kate Monroe's favorite list.

You can also sign-up to receive email notifications whenever Kate Monroe releases a new book.