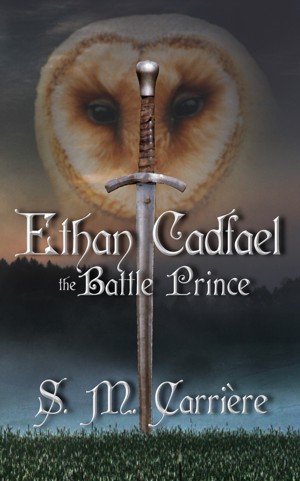 By S.M. Carrière
When a young warrior-queen stumbles into the ho-hum capital city of Canada, all hell breaks loose. More
Ethan Evans, a Carleton University student with everything going for him, stumbles upon the mysterious body of a gravely injured young woman on campus one Hallowe'en. Given to the care of the Ottawa Police and the staff at the Montfort hospital, he thinks no more of it.

Saved by the very same girl he found, he embarks upon a seemingly impossible quest to return the young queen to her people before the divide between worlds closes for another year. Chased by monsters and the Ottawa Police alike, the pair recruit a motley crew of unlikely friends to help them on their way.

Meanwhile, in the land of the Pobl Gwir, the idyllic island city, Y Ynys Bendigaid, and the mighty fortress, Caer Avallach, is under siege, the island lake surrounded on all sides by the frog-like men known to them as the Dynion Gors.

Desperately in need of their queen, and the Knights of Caer Avallach who followed her onto the battlefield, the people of Y Ynys Bendigaid await their champion...

Born in 1983 in Quito, Ecuador, S.M. Carrière has lived in five countries around the world including Ecuador, Gabon and The Philippines. The family moved to Australia from The Philippines shortly after the commencement of hostilities there in 1989.

After graduating High School, S.M. Carrière worked full time as an Office Junior at a law firm in Brisbane, Queensland before moving to Canada in 2001. In 2002 she began her academic career beginning in Criminology, but switching to Directed Interdisciplinary Studies (focusing on Perhistoric Anthropology and Archaeology) after her first year. She graduated with a B.A. Hon from Carleton University in 2007 with honours.

It wasn't until well after graduation that writing found her. She hasn't looked back since.

S.M. Carrière now resides in Canada with her two cats and a growing collection of books.

You have subscribed to alerts for S.M. Carri&egrave;re.

You have been added to S.M. Carri&egrave;re's favorite list.

You can also sign-up to receive email notifications whenever S.M. Carri&egrave;re releases a new book.