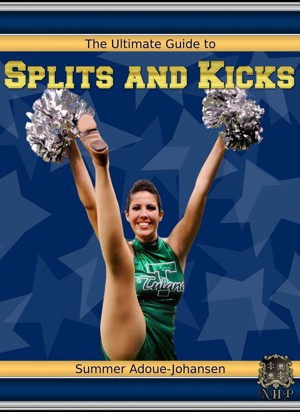 The Ultimate Guide to Splits and Kicks

• improve your flexibility for great splits

Summer Adoue-Johansen's involvement in dance has spanned over 20 years and includes training in jazz, ballet, tap, and hip hop.

Before beginning her career in dance and drill team, Mrs. Adoue-Johansen was involved in cheerleading from 1990-1992 in her hometown of Waxahachie , Texas , and was selected as a UCA All-Star Cheerleader. After the experience gained from cheerleading, she turned to drill team and became a member of the Waxahachie H.S. Cherokee Charmers from 1992-1994, for which she also served as a Senior Lieutenant. During her time as a Cherokee Charmer, Mrs. Adoue-Johansen received numerous awards including All-American, Dance Company, Kick Company, Outstanding Girl, and was also a finalist for Miss American High Kick.

Mrs. Adoue-Johansen continued her passion for dance and drill team as a member of the Texas Aggie Dance Team at Texas A&M University in 1996, where she also completed her degree in political science with a minor in business administration. In 1994, Mrs. Adoue-Johansen joined the staff of American Dance/Drill Team School and has taught and choreographed for numerous high schools and junior teams throughout the country. She currently serves as a camp manager and a head instructor for American Dance/Drill Team School â summer camps and has enjoyed guiding dance teams to reach their full potential.

Since 1996, Mrs. Adoue-Johansen has served as an adjudicator at dance competitions on both the state and national level. She has judged countless dance team auditions for high school and junior teams and has helped many dancers prepare for auditions.

Mrs. Adoue-Johansen is also a certified fitness instructor through The Cooper Institute in Dallas, Texas, and enjoys dancing to keep healthy and stay in shape. In addition to her love for dance, Mrs. Adoue-Johansen enjoys creating company websites and manages the extensive site for American Dance/Drill Team School. She currently lives in Houston with her husband Espen and continues to train at local dance studios to update her technique and skills. She truly believes in the benefits of team sports and credits much of her own success to her involvement with dance teams. She is also Head Coach for a cheerleading program in Houston, Texas, which won back-to-back National Championships with American Cheer Power Texas State Championship three years in a row, where they also received the prestigious high-point award for the highest ranking cheer program. Her team has also been highlighted in numerous articles in several Houston publications for their quick rise to excellence and perfection.

You have subscribed to alerts for Summer Adoue-Johansen.

You have been added to Summer Adoue-Johansen's favorite list.

You can also sign-up to receive email notifications whenever Summer Adoue-Johansen releases a new book.