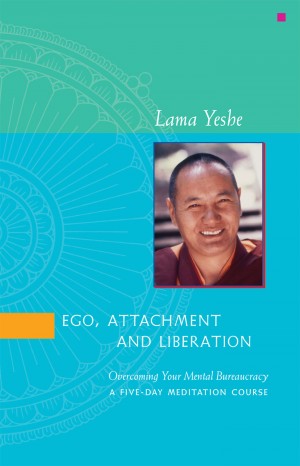 This book contains the teachings and meditations Lama gave at a five-day retreat he led near Melbourne, Australia, which he introduced by saying:

"Whether or not this five-day meditation course becomes beneficial is up to you; it depends on your own mind. It’s not a lama thing; I’m not going to bring you to enlightenment in this short time. Instead of having too many expectations of the lama, it’s better that you generate a pure motivation for being here. Expectations cause mental problems; instead of being positive, they become negative...

"If over the next five days you can begin to recognize the reality of your own nature, this meditation course will have been worthwhile. Therefore, dedicate your actions during this time to discovering inner freedom through recognizing the negative characteristics of your own uncontrolled mind."

In line with Lama’s intentions, this book is dedicated to the awakening of inner freedom within the minds of its readers and all other sentient beings.

This book is made possible by kind supporters of the Archive who, like you, appreciate how we make these teachings available in so many ways, including in our website for instant reading, listening or downloading, and as printed and electronic books.

Our website offers immediate access to thousands of pages of teachings and hundreds of audio recordings by some of the greatest lamas of our time. Our photo gallery and our ever-popular books are also freely accessible there.

Please help us increase our efforts to spread the Dharma for the happiness and benefit of all beings. You can find out more about becoming a supporter of the Archive and see all we have to offer by visiting our website.

Thank you so much, and please enjoy this e-book.

Lama Thubten Yeshe was born in Tibet in 1935. At the age of six, he entered the great Sera Monastic University, Lhasa, where he studied until 1959, when the Chinese invasion of Tibet forced him into exile in India. Lama Yeshe continued to study and meditate in India until 1967, when, with his chief disciple, Lama Thubten Zopa Rinpoche, he went to Nepal. Two years later he established Kopan Monastery, near Kathmandu, Nepal, in order to teach Buddhism to Westerners.

In 1974, the Lamas began making annual teaching tours to the West, and as a result of these travels a worldwide network of Buddhist teaching and meditation centers - the Foundation for the Preservation of the Mahayana Tradition (FPMT) - began to develop.

In 1984, after an intense decade of imparting a wide variety of incredible teachings and establishing one FPMT activity after another, at the age of forty-nine, Lama Yeshe passed away. He was reborn as Ösel Hita Torres in Spain in 1985, recognized as the incarnation of Lama Yeshe by His Holiness the Dalai Lama in 1986, and, as the monk Lama Tenzin Osel Rinpoche, began studying for his geshe degree in 1992 at the reconstituted Sera Monastery in South India. Lama’s remarkable story is told in Vicki Mackenzie’s book, Reincarnation: The Boy Lama (Wisdom Publications, 1996). Other teachings have been published by Wisdom Books, including Wisdom Energy; Introduction to Tantra; The Tantric Path of Purification (Becoming Vajrasattva) and more.

Thousands of pages of Lama's teachings have been made available as transcripts, books and audio by the Lama Yeshe Wisdom Archive, and most are freely available through the Archive's website at LamaYeshe.com.

You have subscribed to alerts for Lama Yeshe.

You have been added to Lama Yeshe's favorite list.

You can also sign-up to receive email notifications whenever Lama Yeshe releases a new book.