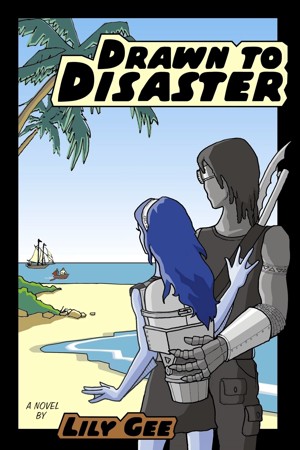 By Lily Gee
Rated 4.83/5 based on 6 reviews
A shape-shifting vortex of doom courts his captive, an amphibious historian, in this darkly humorous metafiction adventure.

As Zarena tries to outwit Morgoz the Dark Destroyer and escape his metal claws, she's drawn into a world of wolf-boy minions, vengeful ex-girlfriends, hired killers, and advanced technology. Then he reveals a reality-bending secret--and insists she make a critical choice. More
"Our world is not what it seems. I've learned this from a metamorphic madman with submarines, jet packs, computers, shock waves, and minion armies at his metal fingertips."

Morgoz the Dark Destroyer has fallen for Zarena, the amphibious blue historian he captured as part of his world domination plan. Or has he? For an incarnation of chaos he's unexpectedly civilized, but she distrusts his motives. Plus, his mechanical hands are rather creepy.

Beset by unruly wolf-boys, murderous ex-girlfriends, and mercenary warriors, Zarena hopes she'll survive long enough to discover the truth and return to her people. Then Morgoz reveals a reality-bending secret--and forces her to make a critical choice.

Lily Gee is an unremarkable human (engineer, wife, mom) with an overactive imagination.

DRAWN TO DISASTER by Lily Gee
In this metafiction adventure novel, a shape-shifting vortex of doom courts his captive, an amphibious historian, while minions, molls, and mercenaries cause mayhem. (Promo video, length 1:15)

I found this book through a review on the BZPower homepage, letting us know that user GaliGee under the name Lily Gee has published her own book. I had heard of GG before, simply browsing BZPower it's one of those names you come across; however, I have never read any of the stories she was known for. I decided to give Drawn to Disaster a try, having not read a good book in a while, and I thoroughly enjoyed it. They say it is similar to her other works, but having not read them I think the book tells a new story- not entirely original, but a refreshing read nonetheless. The characters are well-defined and the story has some twists and turns that I honestly never expected. I will highly recommend D2D to any and all possible readers, and I'll keep any eye out for the sequel! Great job Lily Gee, and keep up the excellent writing!

Before her first foray into original fiction, I knew Lily Gee as a screen name. Under the pseudonym of GaliGee, she wrote fanfiction set in the universe of Bionicle. She was doubtlessly the most prolific fanfiction author in the fandom, and for good reason; she has a gift for making even derivative work fresh and exciting. During my middle school years, I looked forward to every Tuesday and Friday; those were the days Gee updated her current story with a new chapter.

Now I'm almost 21, and a few days ago I decided to revisit the fantasies I loved as a kid. I was surprised to find that I enjoyed them just as much as I did years ago. I think that's a real credit to Lily Gee's skill, considering that the Bionicle franchise is geared towards preteen boys. After I tore through every short story and epic she'd completed over the years, I was left wanting more. So I was thrilled when I saw that Gee had just recently published her first novel, and purchased it the next day.

Drawn to Disaster is based on Gee's popular Makuta series, and follows the same tried-and-true formula. This is both its greatest draw and its biggest disappointment. At the beginning I got the impression that the novel was just an amalgamation of the series, compressed to fit in a book, and names modified to avoid copyright violations. Some of the scenes and dialogue are even recycled wholesale from Gee's previous work.

Yet I find myself having to forgive that, simply because she's a good enough writer to make it work. Gee managed to breathe new life into what I thought was Frankenstein's monster. Despite my initial concerns, Drawn to Disaster contains fresh ideas and a twist I can honestly say I never expected, in addition to the witty dialogue and fleshed-out characters I've come to expect from her.

But yet again this proves an annoyance. Despite my gripes about lack of originality, I was disappointed that the novel lacks the utter scope of the Makuta series. For instance, the one-sided rivalry between Yavahna and Zarena was never really explored, whereas it took two short stories before their Makuta counterparts made peace.

In spite of all this, I found myself really engrossed in Drawn to Disaster. It was an absolute treat to see another story from “GaliGee.” It's clever and genuinely funny, and even if you've never been exposed to Bionicle or Gee's fanfiction, you'll enjoy this book.

Being the first work of Lily Gee that I've read, I was a little unsure as to how the book would turn out with the author's writing skills. I will never doubt Lily Gee's works again. The book was one of the best reads I've had in a while, drawing from the fantasy of modern day literature and incorporating the long-told story of the evil mastermind and lady in peril. Drawn to Disaster also has much uniqueness to it, but that's for you to figure out for yourself. A+, Lily Gee!

As this is the first work written by Lily Gee that I've read, I was left craving for more at the end. As soon as I saw those words, my heart ached for more, almost as Morgoz longed for Zarena. Honestly, I'd like to see a movie by James Cameron in the works, or even better. I hope to see a sequel, and It's great to see another great work of literature come to life. A graphic novel should be produced, as well!

Being a reader of primarily fantasy, action and sci-fi as opposed to romance, along with fan-fiction and comedy, I never would of guessed that a link found on the ever-popular BIONICLE fanforum would lead to my interest in Lily Gee's penmanship. I found myself immersing deeper and deeper into the world painted by words, the occasional readjustment of my headphones to atone the music being the only thing keeping me from depth-diving and never surfacing from such a fantastic world.

As LewaLew stated, as an avid fan of Lily Gee's previous works, I picked up on all the phrases, sentences and even the characters.

Though I must admit that the Water Elder could drop the past back where it belongs.

I plan on recommending this book to as many people as I can and, though I have the ebook, I certainly plan on buying a paperback copy.

Lily Gee, if you read this, here's to you getting an author's award relatively soon! *Raises a glass*

Drawn to Disaster is an interesting venture into a fantasy world where the supervillain decides he needs a girlfriend. Zarena's life as the historian for a little Z-shaped island with exotic inhabitants representing the four elements spins into an unsolicited trip with Morgoz, the "Dark Destroyer" to his lair. She tries bargaining with the all-powerful entity for her freedom, but Morgoz seems to be only interested in winning her heart through his rather unconventional methods.

Eventually, Zarena's time at the Big Bad's lair gets her in deep with the elders back home on Za, and also lands her home island in hot water with one of Morgoz's associates. The more she tries to find some way to make her life normal again, the more it gets wrested from her control. And surprisingly enough, Morgoz knows exactly who is pulling the strings behind this entire story.

While this is the first book Lily Gee has published, some of us have already read some of her previous stories on the BIONICLE fansite, BZPower.com, and they follow the same path Drawn to Disaster does. Anyone who has read her Makuta stories there will find many of their memorable moments recycled into this world, and it proves no less entertaining for it. The book has many laughs and the reader will sympathize with Zarena and her captor as the story progresses, but the reader won't be able to help wondering what on Za his true motives and goals are. My favorite moment in the book comes when Morgoz reveals the secret of what makes their world go round, and will make the reader rethink over how the characters feel about the new revelation.

I enjoyed the book very much, as I did all of Lily Gee's previous work. I did find the portions rehashed from her BIONICLE fanfics to be rather repetitive, but to someone who has never read her work before, the entire story should feel very fresh, fun, and fascinating. This book is very much worth the price, and I would highly recommend it.

You have subscribed to alerts for Lily Gee.

You have been added to Lily Gee's favorite list.

You can also sign-up to receive email notifications whenever Lily Gee releases a new book.