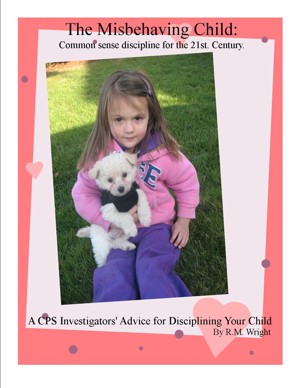 The Misbehaving Child. Common sense discipline for the 21st. century.

Robert Wright is a writer, and consultant who earned his MA in human behavior at National University in 1999. He continues to write and act as a consultant to families, schools, church organizations, and social services agencies on Native American social work practices.

In 1999, he received his Masters Degree in human behavior from National University and began in the field of Social Services with San Diego's renowned Indian Specialty Unit. Wright's inquiring mind allowed him work closely with the various tribal entities to provide the best solutions for the problems and issues native families face in distinct non-native social work practices.

Mr. Wright is known for his contributions as an investigator for the Native American Indian Specialty Unit in San Diego. He is frequently in demand as a consultant to social service agencies, church groups and families who are unaware of the Federal Indian Child Welfare Act (ICWA).

Mr. Wright is acknowledged for his caring and understanding nature when interviewing children who have been abused to discover the truth, having completed both the Social Worker Training Academy in Southern California and the Harbor View Sexual Abuse forensic interview training in Washington State.

A former investigator for both San Diego Health and Human Services Agency and the Washington State Department of Children and Family Services, Mr. Wright frequently speaks to social workers and church groups around the country on how to work with Tribal Agencies for the best practices for families on and off reservations.

Mr. Wright is also a Realtor with Keller-Williams in Fremont, California and actively works with people who want to relocate to Northern California. Mr. Wright currently resides in Pennsylvania with his wife, their cat, Bibbler and their dog, Dee-doy.

You have subscribed to alerts for R.M. Wright.

You have been added to R.M. Wright's favorite list.

You can also sign-up to receive email notifications whenever R.M. Wright releases a new book.