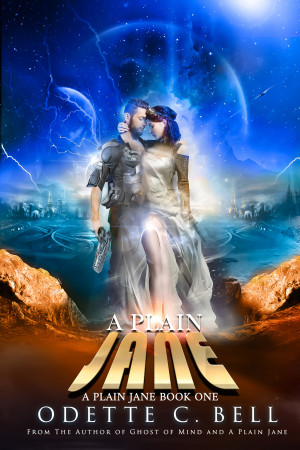 A Plain Jane Book One

About the Series: A Plain Jane

Also in Series: A Plain Jane

Reviews of A Plain Jane Book One by Odette C. Bell

Plain Jane is actually a very human looking alien, but in this story there are lot of aliens, most of them too human looking to be believable. At least in her case, we know that she was deliberately modified to look human, her race always tries to modify themselves to look like those around them. She can also be taken over by an implant in her brain that can control her to perform amazing physical feats that she cannot perform under her own control. She has tried all her life to attract as little notice as possible. We know very little else about her history.

The plot begins with her being attacked by an assassin robot while the human race's greatest hero happens to be walking by at the time and saves her. He then develops an interest in her, though not an explicitly sexual one. He soon finds she is much more than she seems and they begin an adventure trying to get away from the assassin, then ever escalating threats in ever more distant realms. It's a decent adventure, not excessively violent and with enough twists and turns to be interesting. It involves the galaxy's formerly greatest race, which she seems to be a member of, and the vicious killer race that destroyed them.

The characters in this realize that they are sexual beings, but there is no sex at all. The prose and proofreading are fine, not perfect but nothing that detracts from the story. This is not a science based story and some of the things, like the hero's 'armor' probably aren't going to come about but again, it is nothing that detracts from the story. The story doesn't end in this volume. The volume doesn't quite end in the middle of a sentence, but in a double cliffhanger in an effort to get you to spend $3.99 for the next volume.

Very enjoyable read which left me wanting more. The storyline kept moving and never stopped. The questions about Jane are a powerful mystery which the reader wants to solve.

In some ways it is simplistic with a single storyline and two primary characters. There wasn't very much worldbuilding or background, but just enough.

If you want a complex epic multi-thread story, and very detailed scene setting, look elsewhere. But for a fun read, this will do nicely

This book is written from the viewpoint of the two main characters. With the two viewpoints been interlaced. Now I am not usually a fan of this technique but somehow Odette Bell managed to pull it off as I thoroughly enjoyed this book. In fact I have already purchased book 2; which is amazing in its self, given the size of my to-read pile.

Once again I'm behind on my reviews so a bunch of these will look a lot alike! Odette Bell is brilliant and has become a favorite author. I hope she doesn't move out of my price range because of her amazing talent!

The title caught me and well, the author, of course! I'm a bit of a Plain Jane at first! :D Jane is so sssllllooooowwww to catch on and then her Hero! Well, this is a Must Read! Ms. Bell's other species are terrific too. I'd love to travel her Universe!

I'm a huge Science Fiction fan and thought that I would give this book a try as the write up sounded intriguing. I am so thankful I did as it was a wonderfully written story. The characters and the world building were excellent and I can't wait until I get hold of book two to continue the saga.

You have subscribed to Smashwords Alerts new release notifications for Odette C. Bell.