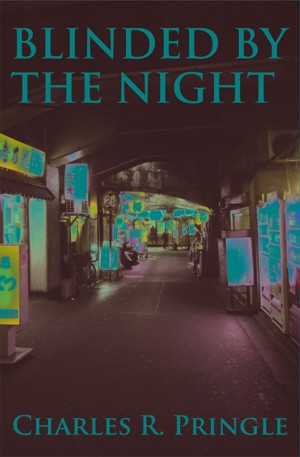 Blinded By The Night

By Charles Pringle
A complex and clever serial killer is targeting young foreign women working as hostesses in the Roppongi district of Tokyo. Akira Toyoda a detective in the International Criminal Investigation Division is taxed with tracking down the killer. While the killer has a free hand, Toyoda’s hands are tied because he has to work together with Detective Hideki Watanabe, his worst enemy. More
Akira Toyoda, a detective in the International Criminal Investigation Division of the Tokyo Metropolitan Police Department who grew up in the north of England, is in a bar in Roppongi with his girlfriend when he is called a murder scene in northeast Tokyo. The victim is a young foreign woman who has been brutally raped and murdered and dumped on a plot of waste ground. When Toyoda arrives he finds that Hideki Watanabe, his worst enemy, is the detective in charge of the crime scene.

One week later the second victim is found. She is also a young foreign woman, and is similar in appearance to the first victim. Toyoda realizes that they have a serial killer on their hands. Identifying the victims is a problem because nobody has reported them missing, so he assumes that they are working illegally in the night trade.

In the following weeks as more victims turn up, Toyoda starts digging deep into the dark side of Roppongi, but nobody will cooperate with the police. When a member of the Russian mafia who is involved in a stolen car and smuggling racket is arrested, he offers to give the name of one of the murdered girls in exchange for a lighter sentence. This is the first break in the case.

As the hunt for the killer intensifies, a Japanese girl is found murdered along with a man presumed to have committed suicide. Although the latest victim is not a foreign hostess, all other characteristics of the crime are similar to those of the previous crimes. The police then consider the case solved. Toyoda, however, does not hold with this and continues the investigation. Will he be proved right? Or will he waste his time and damage is reputation?

Much of the action takes place in parts of Tokyo not on the normal tourist itinerary. Consequently, the reader is taken on a tour of the underbelly of the city, to some of the more insalubrious areas unfamiliar to the average visitor. The reader will also learn some startling facts about Tokyo, the culture of Japan, and the Japanese people.
Available ebook formats: epub mobi pdf rtf lrf pdb txt html
First 15% Sample: epub mobi (Kindle) lrf more Online Reader
pdb
Price: $1.99 USD
Buy Add to Library Give as a Gift
How gifting works
Create Widget
Tags: crime serial killer tokyo police detective japan crime
About Charles Pringle

Although I was born in the northeast of England, I have lived most of my life outside the UK. I basically grew up in Germany, and have lived in East Asia for the past 30 years—29 years in Japan and 18 months in China—where I have worked as a freelance copywriter and editor for a number of major Japanese companies. I’ve written hundreds of articles on Japan as well as two travel guides (one for Thomas Cook and one for Compass Maps) and a Japanese phrase guide (for Thomas Cook).
I am also credited as the author of a book called Neo Shunga (Shunga is the term for Japanese erotic art of the Edo Period), but, in fact, I only wrote the introduction and the captions. The book consists mainly of woodblock prints.
Blinded by the Night is my first novel in English (I have published one in Japanese), and it is the first in a series featuring Akira Toyoda. I expect to finish the second novel in this series, provisionally titled Four Horsemen of the Apocalypse, by the end of the year.

Reviews of Blinded By The Night by Charles Pringle

Review
Ian Runcie reviewed on Nov. 9, 2012
(no rating)
Smashwords charged me for this book. I have not asked for it not have I downloaded it. I have written to Smashwords twice to tell them and have been ignored. Now they have sent me an email to ask me to review the book!

You have subscribed to alerts for Charles Pringle.

You have been added to Charles Pringle's favorite list.

You can also sign-up to receive email notifications whenever Charles Pringle releases a new book.