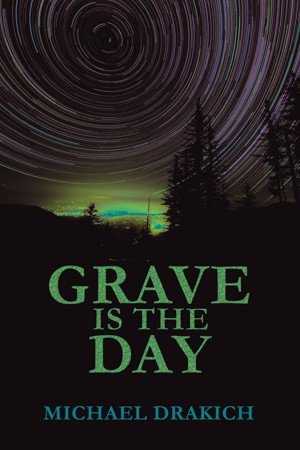 Grave Is The Day

Set against the back drop of the Space Race and the Cold War, both the United States and the Soviet Union have a new issue to deal with, aliens from outer space. More
In October of 1957, more than Sputnik fell to Earth...

Set against the back drop of the Space Race and the Cold War, both the United States and the Soviet Union have a new issue to deal with, aliens from outer space. Both the Braannoo and the Muurgu are at war with each other and Earth becomes the newest battleground in their struggle. Spanning time from the launch of Sputnik to the near future, the interplay of historical events from a new light make you ask the question, could this all be true? The capture of aliens near small town USA unites three players from different quarters, Commander Kraanox of the Braannoo, First Lieutenant Wayne Bucknell as his captor and seven year old Justin Spencer, the first to make alien contact.
Available ebook formats: epub mobi pdf rtf lrf pdb txt html
First 20% Sample: epub mobi (Kindle) lrf more Online Reader
pdb
Price: $4.99 USD
Buy Add to Library Give as a Gift
How gifting works
Create Widget
Tags: historical fiction space opera science fiction aliens
About Michael Drakich

A new and exciting author in speculative fiction, Michael brings a repertoire of science fiction, fantasy and thrillers to readers everywhere. Michael lives in the quaint neighbourhood of Olde Walkerville in Windsor, Ontario, Canada. Father to three, the family home is an historic Albert Kahn design built in 1895. When not writing, you can find Michael walking down the majestic trees lined streets. Writing is a passion of his that has led to the books you see featured here. It is his hope you enjoy his works.

If you buy a copy of any of my works, please, visit again to provide a comment or a review.

Grave Is The Day - An Epic Science Fiction Novel
In October of 1957, more than Sputnik fell to Earth... Set against the back drop of the Space Race and the Cold War, both the United States and the Soviet Union have a new issue to deal with, aliens from outer space. Both the Braannoo and the Muurgu are at war with each other and Earth becomes the newest battleground in their struggle.

The writing was great and pulled me in (there were a few editing hiccups here and there, but nothing to throw me out of the story…obviously since I stayed up way to late reading this) the characters were well rounded and each with their own distinct personality.

The way he wove historical events in and gave them other reasons for happening was absolutely masterful. The science fiction elements were plausible and made perfect sense in the book. I loved the little details like when the Flintstones and Star Trek first started. This book covers a large amount of time as the reader travels from the Sputnik first launching, through the Cuban Missile Crisis, past the fall of the Soviet Union to present day and beyond. Mr. Drakich weaves this story through history with a deft and entertaining hand.

They say that every story has something lacking, but I tell you, I’m really struggling to come up with what it might be in this book. After much reaching and searching, I finally decided on a couple of things. I was surprised Justin wasn’t more excited when he first met Rex, since he had been hoping for that since he was a child. The only major historical event that I’m surprised wasn’t covered was the loss of the space shuttle Challenger. I remember sitting in school and watching that happen in real time. It was sadly, a rather large event at that time and though I kept waiting for it to happen in the book, it never did. Lastly, I wish Rex would have played a part in the ending. Mr. Drakich did a great job of endearing the reader to him and I missed seeing him at the last.

This book gets a full five stars from me. I will happily return to it again and again. I feel like Kraanox, Justin, and Wayne are old friends that I will look forward to visiting many times.

My Expectations
Based on the blurb and on the cover I expected a character driven story with action and twists and turns.

The Delivery
The 225 pages of the story are divided into 46 consecutively numbered chapters.
I do not know how Michael Drakich did it but when you read the book you get the impression the story is definitely longer.
Maybe one of the reason is the time span covered in the book - one average human life.

As you could read in the description this is one more book about aliens who discover earth. Fortunately it differs from all the stories I know about aliens on earth.

Aliens - aren't they these little green men in flying saucers? I think that has been a well known imagination in the 1950s. Michael Drakich has been clever enough to ignore that picture. His aliens look like humans.
And he went further. Like the Cold War on earth the Braannoo and the Muurgu from planet Traanu are at war with each other. The difference is that they use real weapons instead of saber-rattling.
The space ship crash is the result of a space ship battle which brings the Braannoo Kraanox to an unscheduled visit of planet Earth. Kraanox is one of the main characters. Due to former studies he knows a lot more about earth and its inhabitants than vice versa. Of course the injured Kraanox tries to escape the military but that is just a delay of his arrest. Anyway there is time in enough to introduce the next main character, seven year old Justin Spence. He is the first one to meet an alien which he can't identify as an alien. Justin offers Kraanox a piece of carrot cake. A gesture which has an impact of the rest of the story. Finally Kraanox is arrested by First Lieutenant Way Bucknell, who is the third main character. So we have an alien, a boy and an officer. What a great mix! Each of them shows an own personality and they develop within the story which revolves around these three characters.

The rest of the story we follow these three individuals and author Michael Drakich does a great job to connect the characters with the ongoing history of earth and Traanu. It is fascinating to read how events on earth are related to the Braannoo and the Muurgu.
Furthermore the story leads in a completely other direction as I expected. I can't tell you more without spoilers but at the end of the story you will know why Michael Drakich did it this way.
I admit that I have had doubts around the middle of the book but they proved to be unsubstantiated.

At first sight is Grave is the Day a enjoyable science fiction story. But there is so much more which depends on the attention of the reader to be discovered. Do you really know what it means to live in a democracy? Do you really understand the concept of friendship? Do you know why it is so important to have moralities?
Read Grave is the Day and you get answers to these question. No, no, no, Grave is the Day is far beyond to be a handbook for humanity but it breathe values in the way the main characters act and cope with their surrounding. All this will be revealed to you when you start to think about the story a day after you have finished the book.

Grave is the Day is a pleasure to read. It delivers action, emotion, fun, character development, historical events or in one word it is entertaining. But it is so much more. While you read and enjoy something infiltrate your brain, your thoughts, like a slow burning black powder fuse. And the day after you finished the book, the democracy, friendship, moralities "bomb" explode in your head. Please excuse this martial picture. It is the humble try to explain to you what happened to me.

This is my short and handy summary of Grave is the Day:
Enjoyable science fiction with a thoughtful afterburner

In case you missed critical notes: I delivered none.

From my point of view Grave is the Day by Michael Drakich is a great gift for Christmas, Easter, Birthday and so on.

You have subscribed to alerts for Michael Drakich.

You have been added to Michael Drakich's favorite list.

You can also sign-up to receive email notifications whenever Michael Drakich releases a new book.