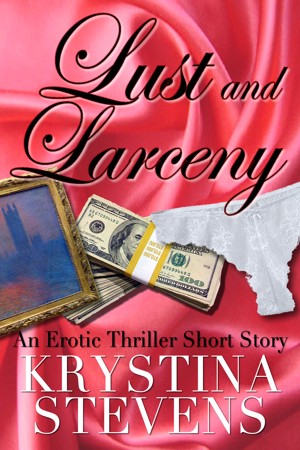 Rated 4.60/5 based on 5 reviews
Ariana Walsh is a professional thief. Trevor Garrison is a computer genius, and Ariana's key to a major bank heist.

Before the night is over, the two of them will be rich beyond measure, unless their lust for each other jeopardizes the job.

Arianna is a woman after my heart! She knows what she wants and isn't afraid to go after it!

I loved this book,the characters were well developed, and I loved the twists and turns the author takes you on! I can't wait to dive into the next one! Krystina Stevens is an up and coming author, indeed!

Hot and sexy with a super unexpected twist. Nice short read that has you wanting more. Can't wait for the second one.

A bank heist and HOT celebratory sex with a surprise at the end. Short but good read. Would like to see it made into full novel.

Arianna is a woman in control. Of her desires, her men and her future. She gets what she wants, and cuts off the excess.

I really enjoyed this book. The characters were amazing. I am really looking forward to reading more of Krystina's work!

I am a HUGE fan of Terry Pratchett's Discworld novels. Not only because of the rich fantasy setting, the humor or the wisdom that is found in his pages. And lest we forget, the simply marvelous stories he can spin. But, if there is one trademark of his work, it is his love for imperfect characters.

Sam Vimes is married to an overweight woman. Rincewind is a wizard that cannot even spell wizard.

It is very rare that you will read a story where the hero is a hunk of a man with a lavish blonde by his side.

I know that this is unfair to all authors out there, but thanks to Sir Terry, I kind of expect characters that have a flaw, or in the very least, a story that does not always have a set in stone concrete happy ending.

Erotica, as much as I love tales of raunchy adventures, does not always offer me that. Instead, we are "treated" as it where to a lot of stories where everything is very cookie cutter. Man meets Woman. Man and Woman is attracted to each other, and well, we all can see where this is going. It follows a lot down Predictability Lane and goes nowhere.

What I like to read is a bit of an adventure. Yes, a hot sex scene makes the heart go boom. But it does help if there is a bit of tension outside the bedroom as well. Or for that matter, a completely different setting to start things of with.

In all this, Krystina Stevens succeeds. Her short story, Lust and Larceny follows a different path. It starts off with a robbery, does the kinky and then hands you a twist that I have to admit, I did not see coming. It is a very good thing if an author can set you up for one thing but then surprises you, and then have a very good reason for the plot taking the turn it does.

I do not want to elaborate too much on the plot. I hate to spoil a story. But you can rest assured that you will read a very well thought out plot that is masterfully executed in the small space an author has in a short story.

The progression from beginning to end is smart. The chemistry between characters sizzles. The love scene sets fire to the drapes and burns the house down. And if I may, the ending to said love scene is quite well, let's just say it is the right kind of dirty.

Characters got the depth to make them real, and it makes sense to have them in the situation they find themselves in.

I'll admit that I enjoyed Lust and Larceny. Krystina Stevens deserves to be read. If you are considering this book, then go for it. You won't be disappointed.

You have subscribed to alerts for Krystina Stevens.

You have been added to Krystina Stevens's favorite list.

You can also sign-up to receive email notifications whenever Krystina Stevens releases a new book.