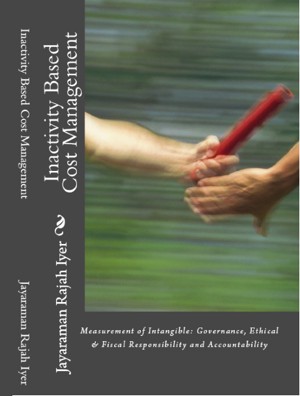 By Jayaraman Iyer
The theme of the book is:Activity is Cost Incidence whereas Inactivity Cost Consequence.
IBCM is Measuring Intangible:Governance,Ethical & Fiscal Responsibility and Accountability.

Cost Consequence is relevant for only one day, i.e. today, as a corollary Governance is feasible for only one day, i.e. today. IBCM measures your skills and energies of Governance, Corporate or Government. Be my guest. More
Inactivity Based Cost Management [IBCM©] enables Study of Cost Consequence: activity has a cost incidence whereas inactivity a cost consequence. This is made feasible by defining Intangible. Intangible is the energy force making things work in this tangible world. When things do not work, as we see today, we tend to blame the financial results and chaos in the economy. That is old capitalism. IBCM© is New Capitalism where strategies are observed and reported on a real-time monitoring basis before the events overtake the results.

This book is the primer for the series of books that would be published. In this book the case-study is on UNCAC - United Nations Convention Against Corruption. UNCAC is common for both Government as well as Corporate.

The second book on the series is now available titled Corporate Critical Density, with the sub-title Leveraging Companies to Occupy Wall Street (with a case-study on Unilever Sustainable Living Plan). This differentiates between good companies and the rest. Good companies must occupy Wall Street displacing the valueless companies. Strategies and good intentions are abstract terms. So are the terms value and valueless.

Inactivity Based Cost Management [IBCM©]and Corporate Critical Density bring us back to basics. Both put us into a position to bring out the reality of business. We now shall practice business with reference to an accountable substance and product which ushers in sustainability of values. In our consumer environment substance and product is obscured by the very complexity of our overly abstracted world. What is crucial is to bring the abstractions into reality, acknowledge value where value is due, and deconstruct what is valueless.

Jayaraman Rajah Iyer is a Chartered Accountant from ICAI, New Delhi (1966) who has a
unique insight into major changes in accounting in India’s history culled from experience with
major firms across the globe. He interned at Hindustan Lever, worked his way up holding key
positions at API and Mafatlals. He introduced the principle of Likely Ultimate Cost
while appointed as Forestry Operations Accountant at Wimco. Leaving India in 1977 was
appointed as General manager of ITI Nigeria, Lagos. Selected by Sir William Castell who is
now the Chairman of the Wellcome trust, joined the Wellcome Foundation, UK to set right the
accounting functions of Wellcome Nigeria. He had also been visiting faculty at SPJIMR, SIES
School of Management, and Vivekananda School of Management where he taught Balanced
Scorecard and Strategic Cost Management based on the Proprietary IBCM (Jayaraman owns
the copyright to Inactivity Based Cost Management, 2006).

He is the son of the renowned educationalist late Rajah Iyer, Headmaster, policy maker
and Member of the Legislative Council of Tamil Nadu till his death in 1974. Jayaraman’s
Rajah Iyer Foundation provides a support system for teachers.

Major contributions to the world of Accounting:

In 1966 Jayaraman learned the ropes under visiting IIM-A faculty member late R
Subrahmanyam of Hindusthan Lever, submitting cost data to the Govt of India for the
fortnightly increase in the selling price of vegetable oil, Dalda. Sub as he was known, used all
possible cost allocation and apportionment while Forward Commodity Exchange was
prevalent during that time. Not a single cost driver could afford to be missed as the difference
in price from one fortnight to the other was so insignificant that it would not be possible to
accommodate in today's currency break-up. In due course, the Govt. of India brought in a
Cost Audit Dept. including medicine and petrol under Dr. Rajagopalan, the first Management
Accountant of ICAI and ICWAI and Jayaraman’s mentor in Management Accounting.

In 1972 as Forestry Operations Accountant for Wimco, Jayaraman acquired an in-depth
knowledge of forest terrains and realized a discrepancy between the accounting year for
WIMCO (Jan. to Dec) and the forestry season (Sep. to March). This made it difficult to
estimate cost for wood sent to the factories. This prompted him to institute a system called
Likely Ultimate Cost to achieve a balanced figure through the year without overloading a cost
figure at the end. It necessitated estimating cost constantly a year ahead.

In the course of his duty, as per the case study detailed in the book, Jayaraman was called
upon to play whistle-blower to corrupt practices. He says “An Accountant is the trustee of the
public wherever he/she is employed. The personal case study reported in this book is not to
be construed as whistle-blowing but performing one's duty. An Accountant undertakes social
responsibility quietly fighting for justice where 'matsyanyaya' is prevalent. Matsya means fish
and nyaya justice, where the big fish swallows the small one.” Jayaraman went through
subsequent inquiries at great personal cost to be vindicated in his stand against corruption.

His joining the Wellcome Foundation later remains possibly the only HR case study where the
whistle-blower was appointed to a company despite a written negative reference from the
previous employer specifically imploring the new employer not to appoint him.
It was in 2001, called upon to prepare a normal ROI for an investment in a major ERP
package that Jayaraman drafted a unique methodology – RoI based on intangible, covering
the entire spectrum of usage of an ERP package and its capability rather than submitting to
the futility of its usage hovering around 8%, for almost all highly priced ERPs, based on cashflow.
Inactivity Based Cost Management was born (and copyrighted) in 2006.

Inactivity Based Cost Management
Preview and background of the Title

Reviews of Inactivity Based Cost Management by Jayaraman Iyer

You have subscribed to Smashwords Alerts new release notifications for Jayaraman Iyer.

You have been added to Jayaraman Iyer's favorite list.

You can also sign-up to receive email notifications whenever Jayaraman Iyer releases a new book.