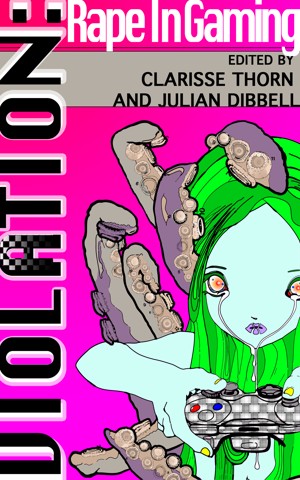 Violation: Rape In Gaming by Clarisse Thorn and Julian Dibbell

How does it feel to be virtually raped? Who would decide to commit rape in a game? Should we, as a society, worry about people who pretend to rape software? What does "rape in gaming" even mean, and why does it happen? In this groundbreaking anthology, the tech writer Julian Dibbell and the feminist S&M writer Clarisse Thorn collaborate with ten others to explore the concept of virtual rape.

Clarisse Thorn is a feminist, sex-positive educator who has delivered sex-related lectures and workshops to a variety of audiences, including New York's Museum of Sex, San Francisco's Center for Sex & Culture, and universities across the USA. She created and curated the original Sex+++ sex-positive documentary film series at Chicago's historic feminist site, Jane Addams Hull-House Museum. She has also volunteered as an archivist, curator and fundraiser for that venerable S&M institution, the Leather Archives & Museum. In 2010, Clarisse returned from working on HIV mitigation in sub-Saharan Africa. Her writing has appeared across the Internet in many many places, from The Guardian to Jezebel. She blogs about feminist sexuality with a focus on S&M at clarissethorn.com, and tweets @clarissethorn.

You have subscribed to alerts for Clarisse Thorn.

You have been added to Clarisse Thorn's favorite list.

You can also sign-up to receive email notifications whenever Clarisse Thorn releases a new book.