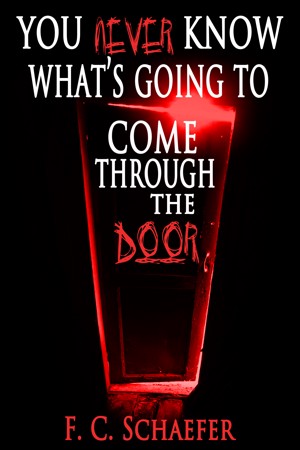 You Never Know What's Going to Come Through the Door

By F.C. Schaefer
Rated 5.00/5 based on 2 reviews
There are some hard and fast rules every businessman lives and dies by: The customer is always right, even if he's a blood thirsty vampire who can ripe your throat open and drain you dry on a whim. If you don't have what he wants in stock, try and sell him what you've got. And if he doesn't like what you've got? Then... More
Everybody needs new clothes sooner or later, even the creatures of the night. But pity the poor sales clerk who has a vampire for a customer. No matter, in retail, you never know what's going to come through the door: maybe a shoplifter or an undead teenager who wants to buy the same sports coat he wore in 1959. If it is the latter, you're still going to be expected to greet him with a smile and make the sale. Even if it costs you your life.
Download: epub mobi (Kindle) pdf more Online Reader
rtf lrf pdb txt
Price: Free! USD
Add to Library
Create Widget
Tags: vampire urban horror undead teen classic monster bloodsuckers go shopping
About F.C. Schaefer

I have always been a fan of such old school monsters as the vampire, the werewolf, the unquiet ghost and the walking dead, and always had the strong ambition to write a novel with one of these creatures in the spotlight. Caden is Coming is my vampire story, but unlike the works of Charlaine Harris and Stephanie Meyer, most of the bloodsuckers in my novel are true spiritual descendants of the original Dracula, returning them to the roles of villain and anti-hero they were always meant to play. Caden is Coming is roughly the same length as Stephen King's Salem's Lot.

It's sequel is Big Crimson, another vampire epic, in which a truly good deed does not go unpunished.

One of my short stories, Pick Your Poison, could best be described as The Stand meets Dracula and the Wolfman. A concept that would make for a great straight to DVD movie. The other one, You Never Know What's Going to Come Through the Door, turns on the mundane encountering the extraordinary when a vampire has to go shopping for a new suit.

Beating Plowshares into Swords is an alternate history of the Vietnam War and comes from my lifelong passion for history, especially military history. I also enjoy speculative fiction and this story is actually the first thing I ever tried to seriously write. It had been sitting around for more than a decade until I pulled it out recently for revisions before putting on the final touches. Alternate History is a sub-genre all its own, but I wanted my first work to be something other than the usual tropes-no What If the South Won the Civil War or What If Hitler had been victorious. I tried to do write something unique, something fans of this sort of thing might enjoy. Hope I was successful.

At the present time I am trying to write a fantasy novel; wish me luck because it's much harder than it looks.

Update: Writing that fantasy novel really was harder than it looked, so much so that I took a break from it and went back to the alternate history sub-genre and the result is the novel, All the Way with JFK: An Alternate History of 1964. It's my take on one of the great What If's of the 20th Century when I speculate on a world where Lee Harvey Oswald's bullet missed the President's head on that fateful day in Dallas. My original intent was to write another novella, but I so fell in love with the story that when I was done, it was epic length. Look for it on Smashwords.

And I have gone back to fantasy novel, started over with a fresh take on it; so far, I'm pleased with the results.

Please check me out on twitter to find coupon codes for discounts on my books.

As stated by previous reviewers this story is a slow burner, but it's not categorized as action or thriller. The author takes some time to build the characters and setting while the story unfolds. This is a well written and well told story.
I enjoyed it.

(review of free book)
anya mcclure reviewed on Nov. 26, 2012
(no rating)
very slow at the start but it bulids up but a very short book.

(review of free book)
anya mcclure reviewed on Nov. 26, 2012
(no rating)
bit slow at the start but it gets going i enjoyed it very much but its short only 12 pages but its worth reading

You have subscribed to alerts for F.C. Schaefer.

You have been added to F.C. Schaefer's favorite list.

You can also sign-up to receive email notifications whenever F.C. Schaefer releases a new book.