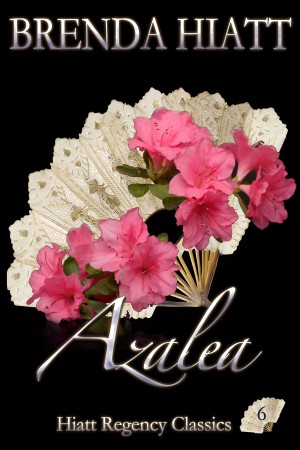 By Brenda Hiatt
After an arranged marriage, Azalea's new husband immediately sails back to England, but she is already in love. When he's lost at sea, she's devastated. Six years later, Azalea sails to England herself and learns that her husband is alive but has no memory of her or their marriage. Worse, he is betrothed! Can Azalea force Christian to remember the truth before he breaks her heart again? More
'Tis better to have loved and lost . . . or perhaps not!

To safeguard her future, orphaned Azalea's grandfather arranges her marriage—in name only, of course, as she is not yet of age—to the son of his oldest friend, Lord Glaedon. Azalea, however, falls head over heels in love with her handsome new husband with all the impetuousness and romanticism of her youth before he sails back to England mere days after the wedding. When she learns of his death at sea, she is devastated. Six years later, Azalea honors her grandfather's dying wish by sailing for England herself to recover her inheritance. Once there, she is stunned to discover that Christian, the beloved husband she has believed dead all this time, is quite definitely alive . . . but seems to have no memory whatsoever of their marriage, or of her! Even worse, he is betrothed . . . to her cousin. Can Azalea possibly force Christian—now the illustrious Earl of Glaedon—to remember the truth? Or must she somehow win him away from her dazzlingly beautiful cousin to prevent him from committing bigamy—and breaking her heart again?

Brenda Hiatt is the New York Times and USA Today bestselling author of twenty-three novels (so far), including historical romance, traditional Regency romance, time travel romance, and young adult science fiction romance. In addition to writing, Brenda is passionate about embracing life to the fullest, to include scuba diving (she has over 60 dives to her credit), Taekwondo (where she is currently pursuing her 4th degree black belt), hiking, traveling…and reading, of course!

About the Series: Hiatt Regency Classics

Brenda Hiatt's original, traditional, "sweet" Regency romances, all set in the same "world" with a few recurring minor characters. Each stands alone, though they are numbered chronologically (in order published). Sparkling romantic adventure in every one!

You have subscribed to alerts for Brenda Hiatt.

You have been added to Brenda Hiatt's favorite list.

You can also sign-up to receive email notifications whenever Brenda Hiatt releases a new book.