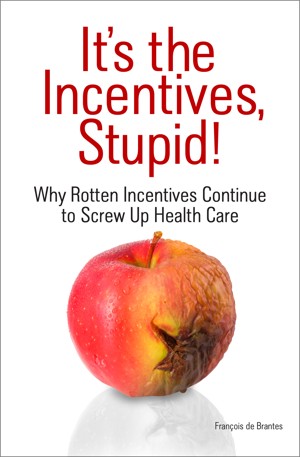 It's The Incentives, Stupid!

By Francois de Brantes
Healthcare is plagued by many things, but none is worse than the incentives that drive physician, hospital and patient behaviors. This book is a compilation of 18 months of reflections on those incentives and offers some solutions to the problems at hand.
Download: epub mobi (Kindle) pdf more Online Reader
rtf lrf pdb txt
Price: Free! USD
Add to Library
Create Widget
Tags: healthcare reform healthcare costs healthcare providers healthcare management healthcare system healthcare delivery
About Francois de Brantes

François de Brantes is SVP of the Commercial Group at Remedy Partners, responsible for business development. Prior to that, François was the Executive Director of the Health Care Incentives Improvement Institute (HCI 3), responsible for setting and implementing the strategy of the organization. This included supervising the implementations of Bridges To Excellence and PROMETHEUS Payment pilots, leading the development of new programs, and designing incentive efforts for employers, health plans and provider organizations.

Mr. de Brantes attended the University of Paris IX - Dauphine where he earned a MS in Economics and Finance. After completing his military service as a platoon leader in a Light Cavalry Regiment, he attended the Tuck School of Business Administration at Dartmouth College, where he graduated with an MBA.

You have subscribed to alerts for Francois de Brantes.

You have been added to Francois de Brantes's favorite list.

You can also sign-up to receive email notifications whenever Francois de Brantes releases a new book.