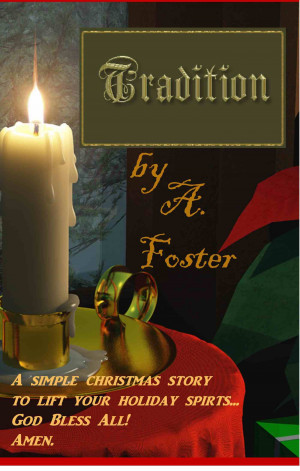 Tom McGuire reads a letter he finds in the church he is cleaning. It is from his daughter he has not seen in nearly 10 years. The words are written on that paper give him hope and a future he had thought lost forever.

The precious traditions we pass to our children define our lives and theirs.

Thank you for taking a moment to check out my site. I hope one of my stories catches your attention. Love to hear from you. Please like me, follow me and above all, tell someone else. I would be so grateful.

I love to write, all kinds of stories. I am interested in real pirates from long ago, spaceships of tomorrow and all the time travel I can get. When I am not writing, I am thinking about new stories to tell and try out. Love to attend campfires and volunteer in classrooms often. A great place to entertain and experiment on themes.

Hope to be invited to your campfire one day...
Have fun and keep reading, dreaming, writing and hugging those you love most.

Read A. Foster's Smashwords Interview
Learn more about A. Foster

I just recently reviewed your book of poems. You looked youthful in that ‘pirate?’ Smashwords profile picture. From your photo in Tradition, I would have modified my review rating accordingly. Oh, are pirates and Christianity altogether kosher? Do they go together? You start off with fairly short and simple sentences. You want to appeal to the kids? ‘Tis a gift to be simple? Oddly, I have found that if you want to write more briefly, keep the word count down, you would be better off writing longer sentences. Mind you, longer sentences are much easier to mangle, bungle, but for that very reason challenge the writer to the heights of prosaic glory. If you do it right, the kids can follow it, just keeping the vocabulary simple enough that they do not have to peruse the dictionary after every phrase. You see, dependent clauses actually require less words, and interjected phrases require less words in the context of the long sentence than if you broke them down into small sentences. (Not saying you do not use dependent clauses in Tradition at all.) Simple sentences have their place and work quite well in Hemingway’s ‘The Old Man and the Sea’. Funny, Hemingway was supposed to be the quintessential journalist novelist, short Anglo-Saxon worded prose sentences. Later, I found out that Hemingway loved to write long sentences to the uttermost degree that he could get away with, or even not get away with. I picked this up by reading some other works of his that did not use the short sentence technique. G. B. Shaw once wrote that he would have written a shorter letter but didn’t have the time. It takes longer to write short. You have to use your words carefully, struggle to be brief, to get more packed into each sentence. It is hard work to do things the simple way. That is why people put up with so much bureaucratic red tape, inane traditional ways. It is too much trouble to do it better. But we must try. Remember those strings of tinsel and Christmas lights that go around the tree? They accentuate the light bulbs, angels and candy canes. Yes, it is no crime to use simple sentences. If Shakespeare interrupts his iambic pentameter with a one-word line of ‘Yes’, it is not mandatory to add 9 more syllables to make it pentameter. As for cooking on Christmas, I remember my mother’s homemade buns just out of the oven, with real butter, just plain white leavened bread but tasty, and my grandmother used to make vinegar candy that was good for the throat, sore throats, though maybe a little hard on the teeth. But then, you never gobbled that bitter stuff down as you would M&M’s, Gummy Bears, etc. There was that ‘traditional’ fruitcake that people only ate a little piece of with melted glaze out of an insane sense of duty to tradition, and the rest of the cake hung around for months in that metal container, that eventually would be used to store sewing material, nuts & bolts (not walnuts, metal nuts.). Gingerbread? Yeah, but “Nibble, nibble who’s been nibbling on my house?” Oh, let’s have the kids home for dinner, out of the cold and into the warmth of the oven (as in - in the oven if possible.) Your climactic scene did make me almost well up with tears, so the main theme was effective for me. I will add a few stars just for that. I would have written a review with longer sentences, but it is Sunday and we are supposed to rest. Or am I the priest of review required to work even on the Sabbath. Jesus says that God never rests and to pull your sheep, and son, and wife out of the ditch on Sunday too, when needful. And it helps to use analogies better. The temple of dad’s soul, the true house of God, and the church. Maybe throwing in contrast? Love your neighbor as yourself; honor your mother and father; but “unless you hate your mother and father and follow me, you cannot be my disciple.” Is hate the opposite of love, or is it lust? How can you love justice and not hate injustice, love God and not hate the evil one that tries to separate men from God? Do you love the sinner, the rapist, traitor, slanderer, whore, pimp, flim-flam man? Or do you love the capacity innate within all men to repent? The repentant thief is no longer a thief. And if you say, “forgive me, Lord,” and then continue to steal in heaven, is that what heaven and righteousness are all about? No, love and hate go together. Love will never and must not conquer hate; it must conquer lust. Lust often comes in the form of vanity and conceit, as in I want my daughter to marry a winner as defined by me, rather than a liver that wins to live and not lives to win. Is it love or just willful conceit? A man leaves his mother and father and becomes one flesh with his wife, and vice versa for the wife. Marriages are made in heaven as we say. The bitter man claims his marriage was made in hell. Is marriage the problem or the base motives of the bride and/or groom? And remember, we are all on – on the Job training in life. That is both job and Job (as in the man from Uz.) We must all learn our lessons. This current world is no bowl of cherries. So you do well to write about important things. You wrote about something well worth writing about and get an extra star for that.

(review of free book)
Keith Waybourn reviewed on Oct. 19, 2012
(no rating)
Carol will always tug at your heart,and somehow make you smile. Good story i did enjoy it.

You have subscribed to alerts for A. Foster.

You have been added to A. Foster's favorite list.

You can also sign-up to receive email notifications whenever A. Foster releases a new book.