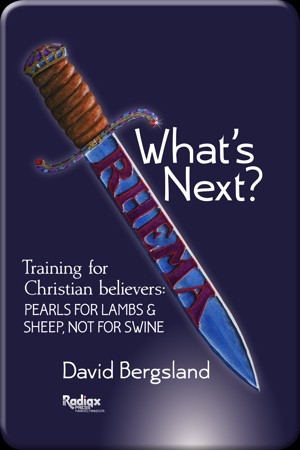 What's Next? This Is Training For New believers: Pearls For Lambs and Sheep; Not For Swine

By David Bergsland
In this day and age, it is common for a person to meet the Lord Jesus and not have anyone to tell them what that means in practical terms. This book is designed to give you the basics you'll need to walk the Christian life—even in dangerous places and critical times. More
How can I please the Lord & what does he expect from me?

Anymore these answers are not commonly provided by the modern church in America, Israel, or Europe. In the Arabic World, India, Southeast Asia, China, and even parts of South America, you can be severely persecuted [even killed] for your new-found faith.

Daily Christian life in most of the world today is dangerous. There are the obvious dangers under Sharia Law, but the pull toward sin and worldliness is equally dangerous in our modern civilization where the absolute truth of the Gospel is seen as intolerant or worse. The last job I had finally came out in the open and forced me to sign a statement agreeing with many thing which I know to be sin. I left that company as soon as I was able to do so—without injuring the students in my care.

There is only one person who is able to lead you through this life and protect you. He is Jesus of Nazareth, Yeshua our Messiah. He purchased your freedom by paying your penalty for sin when He died on the cross as a holy, sinless person. That gives Him the right to tell Satan—and those who serve his evilness—to leave you alone. That gives Him the authority to fill you with His Holy Spirit.

Jesus is your liege Lord and worthy of your love and service. No governmental worries, for He is the one, true loving King over all other pretenders, supreme in all of God’s creation. The government has no power over you—if you are following Jesus’ lead, walking in the Holy Spirit.

Even under severe persecution, He will keep you safe until your work is over and it’s time for you to go home and rejoice. Jesus is more than sufficient. He is your all powerful king. The kingdoms of the world have no power over Him, at all. Follow His lead and you will be fruitful!
It’s a wonderful life!
Available ebook formats: epub mobi pdf rtf lrf pdb txt html
First 50% Sample: epub mobi (Kindle) lrf more Online Reader
pdb
Price: $0.99 USD
Buy Add to Library Give as a Gift
How gifting works
Create Widget
Tags: jesus salvation born again new life walk in the spirit
About David Bergsland

As a hippie in the late 1960s, and a graduate of the University of Minnesota with a BFA in Printmaking, he wears the title of Jesus Freak proudly. David has been an artist and designer since 1967 (as far as he can recall that far in the distant past).
He actually started his design career working for an occult publisher in St. Paul. He spent several wasted years as an ego-maniacal heathen fine artist until he found his true calling as a creative called by God to produce beauty for the kingdom.
That has not been a straight or easy path. Through the years he has tried many media, produced thousands of pieces (most that were pure trash) and taught hundreds of students practical graphic design & digital publishing in 2-year colleges.
In recent years he has pulled out of the public arena entirely. Though not a hermit, he is certainly a recluse, living in a small 2-story, brick home that is over a hundred twenty five years old on a tree-lined street in Mankato, Minnesota. Mainly he writes now, of his experiences and beliefs. Increasingly, he writes fiction. 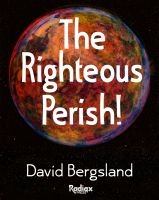 You have subscribed to alerts for David Bergsland.

You have been added to David Bergsland's favorite list.

You can also sign-up to receive email notifications whenever David Bergsland releases a new book.