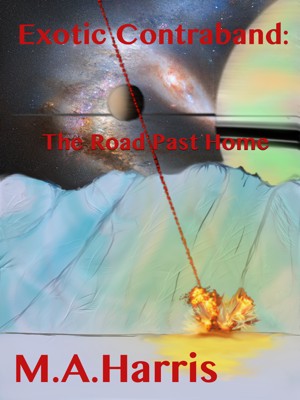 Exotic Contraband: The Road Past Home

By M.A. Harris
We are not alone but we are remote and poorly armed in a larger universe that’s one part utopia, one part adventure and one part nightmare. Unfortunatly the good guys don’t know we’re here and the bad guys are just fine exploiting exotic contraband from Earth. Now the survivors of a lost Air Force jet and an ancient soldier have to find a way home while saving it from itself and the alien menace More
The universe is infinite in extent and the Compact large beyond simple measurement. But the Starship Bostonian has found a road home for the few humans stolen from their home world. But the Compact has strict non interference rules and while returning the humans is allowed, contact beyond that is forbidden. The crew of an Air Force recon jet, kidnapped and sold as creature show exhibits want to go home though their commander, Major Sandra Sebastianii, might have made another decision if she had been alone.
The ancient human commander of the Compact Cartographic Cruiser Bostonian is less sure of his road home, because his birth world is an utterly unrecognizable and all he had once known is dust. Now his place and his friends all reside in the vastness of the Compact, all except for the one person he can’t live without.
Everyone starts out following the rules. But rules are meant to be bent especially when a civilization is on the edge of a war it does not understand the reason for. And while the Qang Smugglers might look cute and cuddly their ruthless arrogance is about to get them into deadly danger, and their stupidity may be the trigger needed to start an interstellar war of unthinkable destructiveness.
Available ebook formats: epub mobi pdf rtf lrf pdb txt html
First 20% Sample: epub mobi (Kindle) lrf more Online Reader
pdb
Price: $1.99 USD
Buy Add to Library Give as a Gift
How gifting works
Create Widget
Tags: scifi romantic elements aliens adventure scifi action adventure contemporary world science fiction f
About M.A. Harris 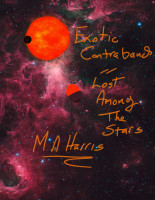 Reviews of Exotic Contraband: The Road Past Home by M.A. Harris