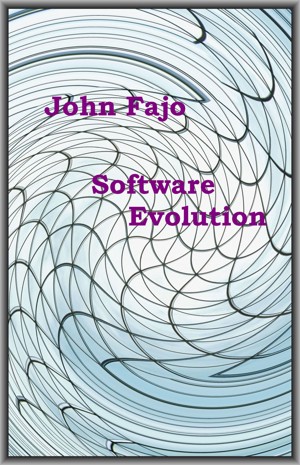 By John Fajo
Arriving in the big city one may find oneself lost, especially if one is to come across an elusive man like the baron, who never reveals himself. Yet there is no escape from destiny as the events unfold, and the protagonists confront each other for multiple showdowns that are to change their lives and the course of history. More
John Fajo
Software Evolution
Abstract

As the title indicates this is a book about software evolution. Software evolution has two meanings and consequently the novel has two continuous parallel themes, one is thriller-like and its main purpose is to give a supportive framework for the other, which is about development in the thinking manner of a person at childhood’s end, this being called software evolution. Besides these, the book attempts to pinpoint the misconceptions people have about the main essence of science, any science for that matter. Here the second meaning of software evolution emerges.

The book is organized into four parts and follows the classical scheme: introduction, main theme, interlude and conclusion. The events are depicted more as slides or short footages, the time elapsing in-between is irrelevant, and time hasn’t the usual meaning due to the second theme; it’s linear from the characters’ point of view, but has non-linear aspects otherwise.

In ‘The inspector’, we have a build up to the main theme. The protagonist, the inspector arrives in a big city, where he is faced with a different world, his ideas are challenged.

In ‘The scientist’, the main theme unfolds. We step into the world of a scientist, not a joyful inventor or a forgetful genius, but an emotionless and well-organized person on an island secluded from the rest of the world. Most of the events are presented from another character’s point of view, which allows perspective to be obtained. It is also vital for the second theme, for this other, nameless person is the one the scientist talks to, presents his ideas, fears, love and hate.

In ‘In deserted nowhere’ our nameless character is banned, has to travel to a far away planet. He is entirely alone, only a dream world helps him survive his solitude. Romanticism is defended; romanticism the scientist criticized in ‘The scientist’. This part also allows the thriller theme to continue several years later than it had ended, without any abrupt jumps.

In ‘The beggar’, we have the conclusion, childhood’s end. The two main characters confront each other for the last time.

The author has written since the age of 8, has received formal education in biochemistry (MD), mathematics (PhD) and law (MD). His main interest in writing is connected to character development, emotions, thinking processes and social conflicts from a somewhat biased point of view, many times contrary to the established line of thinking.

'Software Evolution' can be said to be the first and to this day the major work of the author, written at the age of 21, that he deemed to be presentable to the public. The book attempts to introduce several parallel story lines, and some important emotional and philosophical aspects of scientific research. The work is the third and final version of a project that was to be science fiction in the beginning but the sci-fi aspects completely disappeared in the end; what it evolved to could be termed drama instead. 'Software Evolution' was not only influenced by the author’s study subjects at the time of writing (natural sciences) but by the places and various social systems he had experienced in his childhood (80’s-early 90’s), socialism (Budapest), capitalism (New York) and protestant Puritanism (Bergen).

The book 'Wild Duck revisited' was greatly inspired by the second part of a ten-year stay in Bergen (Norway) that included high school and some university classes, and a short time spent at Fantoft Studentby (a student hostel, the ugliest building complex in named city), where all kinds of nationalities could be met. Many passages of the book are conversations that actually took place there; in such a way, the work shows some thoughts on the Scandinavian lifestyle from an outsider’s viewpoint.

The author had moved to the south since then.

In recent years, the author has been co leader of a contemporary modern art gallery profiling the interconnection of art, science and technology. He is currently secretary of an art academy.

John Fajo is the author’s penname, after his grandfather, anglicized. Profile picture taken around 2002.

You have subscribed to alerts for John Fajo.

You have been added to John Fajo's favorite list.

You can also sign-up to receive email notifications whenever John Fajo releases a new book.