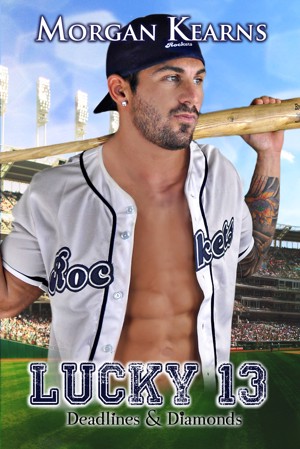 Rated 5.00/5 based on 1 review
Rockets Left Fielder Enrique Santiago considers himself a lucky guy, except when it comes to love.

A painful past with one very prominent reminder molded Shayne Xavier into the woman she is.

Unaware of the demons of her past, Ricky tries to offer strength as Shayne’s life spins out of control. Sometimes Happily-Ever-After is too good to be true. More
Tragedy made it possible for Enrique Santiago to take over as Left Fielder for the Las Vegas Rockets. Talent keeps him there, giving him everything a guy could want. Except a woman to share it with.

A painful past with one very prominent reminder molded Shayne Xavier into the woman she is. She isn’t bitter or jaded, though. She’s a realist. Men can’t be depended upon and only lead to broken promises and shattered hearts.

She is an active member of Romance Writers of America with Published Author Network status. She is the Director of Buildin' the Dream, Authors Helping Authors Conference. www.BuildinTheDream.com .

If not glued to her laptop, Morgan can be found with her nose stuck in a book or cheering for her own little athletes. She lives in Northern Arizona with her amazing family and her English Bulldog, Gus.

Review
Morgan Maulden reviewed on Feb. 6, 2013
(no rating)
* I received this novel by the author in exchange for an honest review*
Lucky 13 is a sweet and heartfelt romance novel with an action-packed ending! I really enjoyed this story, especially the conclusion. Best. Epilougue. Ever. Shayne and Enrique's story is a wonderful addition to Deadlines & Diamonds companion series by Morgan Kearns.

In Out of Left Field, the predecessor to Lucky 13, a shoulder injury ended Matthias Xavier's career. Xavier fell in love, found his long lost sister Shayne Xavier, and was replaced by Enrique Santiago.

Enrique aka Ricky didn't have a huge role in Out of Left Field. He was basically just labeled as the guy who "stole" Xavier's position. In Lucky 13, readers get to know Enrique Santiago for the man he is. Readers quickly realize that Ricky is a loving, compassionate person. He doesn't have a mean bone in his body. He didn't steal anything from anyone. He's just a guy who was chasing his dream and happened to be in the right place, on the right team, at the right time.

Shayne Xavier hasn't had an easy life. Her childhood was rough and adulthood hasn't been all that great either. In Out of Left Field, Shayne was reunited with her brother Xavier, but before that her only family was her son Matt. In Lucky 13, readers learn a lot about Shayne and her past. Readers also get to know Shyane's son Matt. I LOVED Matt. He's such a sweet and mature kid. He was often the voice of reason and he added a lot of entertainment value to this novel.

Shayne and Enrique fell hard and fast for one another. Typically I appreciate a little more build up before the fall, but who am I to deny their fast connection or their strong feelings!

I love the sexy baseball players in the Deadlines & Diamonds series, but I must admit, I kinda like the fact that Lucky 13 focused more on family than baseball. In fact, this novel takes place in the off season so there wasn't hardly any baseball scenes at all in this novel. Of course, Ricky's passion for the sport shined through in this novel but it wasn't the focus of this novel.

I gave Lucky 13 by Morgan Kearns 3 STARS (3.5 STARS). Deadlines & Diamonds is a companion series, meaning each novel could be read individually or in the order they were released. I always encourage readers to read companion series in order, but you definitely don't have to read them in order. You could pick up Lucky 13 and read it without reading any of the novels that came before it.

The term family is defined as the connection between two or more people that exceeds obligation; complete trust, love, honest; forever. Lucky 13 (Deadlines and Diamonds) by Morgan Kearns defines family. When I was reading it, I got warm and fuzzy, teary eyed, nostalgic, happy, sad, hopeful, and even laughed a little bit. I felt like the characters were jumping off of the page and into my life; they were MY family. I cheered for them and wanted to scream when they were on the edge. They had their problems, their faults, their bad luck, and their troubles, but, they also had their love. It was the light at the end of the tunnel that led them to where they belonged. Morgan’s words embodied love; the kind of love that made me wish there was a Enrique Santiago in MY life and MY heart.

You have subscribed to alerts for Morgan Kearns.

You have been added to Morgan Kearns's favorite list.

You can also sign-up to receive email notifications whenever Morgan Kearns releases a new book.