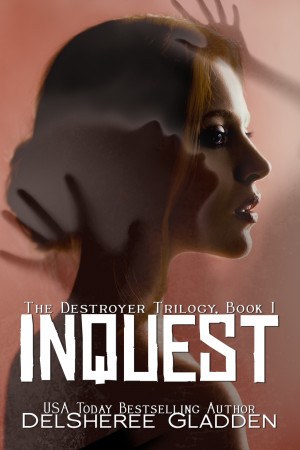 By DelSheree Gladden
Rated 4.67/5 based on 6 reviews
Sixteen year old Libby has a secret destiny that is about to be revealed.

When Libby is proclaimed "The Destroyer" the world turns against her. The ruling Guardians want her dead, but Libby is determined to prove she has no intention of destroying anything. That seems easy enough until her one remaining friend, Milo, is attacked and Libby must chose between her own life and Milo's. More
Book One of The Destroyer Trilogy

For Libby Sparks, turning sixteen means only one thing…death. Guardian rule demands she attend the ritualistic Inquest that will unveil her talents and secure her place in society. But that isn’t all that will be revealed in Libby’s case.

The more talents you have the better, at least to some degree. Four or five talents will guarantee you a life of luxury, but seven…that is the mark of the Destroyer. Libby knows her Inquest will reveal her to be the Guardians’ greatest enemy. Their law requires her death before her eighteenth birthday. If she lives, prophecy foretells that the world will fall into chaos and destruction.

Once her destiny is revealed, Libby is abandoned when her mother throws her out, her boyfriend tries to kill her, and her best friend shuts her out. Only Milo, a slightly grungy outcast, seems willing to be her friend—but Libby soon realizes he has secrets of his own. His secrets may very well have everything to do with her own destiny.

DelSheree Gladden was one of those shy, quiet kids who spent more time reading than talking. Literally. She didn't speak a single word for the first three months of preschool, but she had already taught herself to read. Her fascination with reading led to many hours spent in the library and bookstores, and eventually to writing. She wrote her first novel when she was sixteen years old, but spent ten years rewriting and perfecting it before having it published.

Native to New Mexico, DelSheree and her husband spent several years in Colorado for college and work before moving back home to be near family again. Their two children love having their seventeen cousins close by. When not writing, you can find DelSheree reading, painting, sewing and trying not to get bitten by small children in her work as a dental hygienist. DelSheree is the author of the Escaping Fate Series, Twin Souls Saga, The Destroyer Trilogy, The Aerling Series, Someone Wicked This Way Comes Series, and Date Shark Series.

About the Series: The Destroyer Trilogy

Libby Sparks has always know her fate is to die. Death is better than the alternative. She'll do whatever it takes, including sacrifice her own life, to avoid becoming a monster. It means sifting through the web of lies controlling society, but finding out the truth may be even worse than death.

Also in Series: The Destroyer Trilogy

Reviews of Inquest by DelSheree Gladden

Wow it's that only I feel. The story end just left me wanting more. The story is so unpredictable, I couldn't even assume what is going to happen. When I thought I know what will happen just then another twist. It totally got me hooked. I was up till 1 in the morning, the story from middle got so intriguing that I couldn't stop from finishing it. I totally loved Inquest, I am looking forward to read the series. DelSheree you are awesome your other books that I read are also just great. I am going to read all your other stories, I just can't get enough of your writing.:)

This was a fun read. The world created is rich and well textured. The characters are complex. I want to read more.

On her sixteenth birthday, Libby faces the Inquest which uncovers her talents and her future path. The more talents you have, the better your future but if you have all seven it is a death sentence. Libby's future is The Destroyer, who will end the world, and as her family and friends desert her, only a school outcast stands by her. With two years left until she can be legally killed, Libby has to master all her abilities to keep herself alive.

I liked the sound of this book as soon as it came to my attention and it was an excellent story. Libby approaches her Inquest with dread because she knows what it will say but nothing prepares her for the way everyone reacts. Her boyfriend tries to kill her, her best friend wants nothing to do with her, her mother kicks her out and the whole school turns against her. Libby wants to prove to everyone that she is not evil or a threat to anyone but only Milo wants anything to do with her. I liked Libby because she is a normal girl with terrible secrets that are ruining her life. You feel for her as everyone turns their back on her and part of you wants her to embrace being The Destroyer and get her own back on them! I wanted to thump Lance from the moment the Inquest happened and I wanted Libby to hit him so much! I was nearly yelling at her to make him suffer! I liked Milo and was so keen to know what he was hiding. My guess was in the right sort of area but the author still managed to surprise me with the plot twists, which is always good. I loved the way the book finished, hinting that things were going to change in book 2. There are still secrets waiting to be revealed there I believe ie what is the President's real plan for Cassia? You know he is up to something as you can never trust these dodgy politicians!

I think my favourite scenes were everything that happened from the theatre onwards. I loved the way the plot went into a whole new area that I wasn't expecting and I liked the conclusions that Libby came to. Very satisfying!

Negatives? None. I liked the way the story unfolded, the way it was written and the very human story that was told. Libby is a frightened young woman with scary prospects and flaws and the way that people react to her through the different scenarios she faces is very realistic. It could have been your school that was being described. the character development is excellent and the twists and surprises in the plot keep it fresh and entertaining. You really do want to know what happens next. As soon as I get my Kobo in a few days, I will be getting the rest of this excellent series to read.

So why 4.5 stars? Well I think book 2 will be even better so I have to leave a half star spare for that!

Sixteen-year-old Libby’s life turns upside down on when her forced Inquest determines her fate: to destroy the world. Family, friends, and boyfriend abandon her, and life looks hopeless until she meets outcast Milo, with secrets of his own. Libby tries to prove she does not want to fulfill her role as the Destroyer, but those plotting against her make that impossible. If Libby wants to live, and protect her new friend, she must fight for that right against all odds.

DelSheree Gladden creates characters you want to know, and I enjoyed her ability to mix regular teen emotions into a plot as serious as destroying the world. She combines modern day situations with other-worldly features making it conceivable that this story could be taking place today. Gladden deftly creates character-to-character relationships readers can identify with, including boyfriend/girlfriend, brother/sister, teacher/student and friend/friend. I particularly liked her treatment of betrayal in relationships, without belaboring the point or introducing self-pity. I loved her character development.

The story piles conflict upon conflict, but varies the intensity of the conflict so as not to exhaust the reader. Also, although the concept of a young girl facing her fate of death and destroying the world may sound dark, the book itself includes enough light and hope so it is not a dark novel. Additionally, I appreciated Gladden’s portrayal of violent situations and teen love without overwhelmingly graphic details. The story, characters, and writing keeps the pages turning.

Inquest provides a very enjoyable read, even for those who may not regularly read urban/dystopian/fantasy works. I look forward to reading the rest of the series and following Libby’s adventures to the end, whatever that ending might be.

I also give it five stars. I loved it.

(reviewed 22 days after purchase)
Tara Davis reviewed on Nov. 18, 2012
(no rating)
I loved this book. It was oringal and creative. I would and have recommend it to every one I know. I can't wait for the next one to come out.

You have subscribed to alerts for DelSheree Gladden.

You have been added to DelSheree Gladden's favorite list.

You can also sign-up to receive email notifications whenever DelSheree Gladden releases a new book.