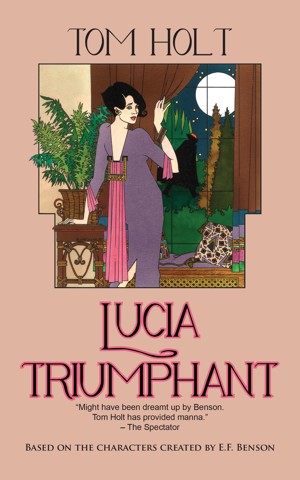 By Tom Holt
In postwar Britain, Lucia and Elizabeth continue to vie for ascendency over the quaint town of Tilling. Who will prevail? Neither woman, if the Tillingites can help it, for their antics offer the best entertainment in town. The second of Tom Holt’s officially sanctioned sequels to the hilarious “Lucia” novels of E.F. Benson. First published in 1986. More
In postwar Britain, the quaint town of Tilling is feeling the pull of both the modern world and its Norman past. Elizabeth Mapp-Flint, in yet another bid to wrest power back from her social rival Lucia Pillson—now the town’s mayor—purchases a motor-car. Hoping to improve her shaky motoring skills in private, she makes a significant tactical error by leaving town. Lucia profits from Elizabeth’s absence by putting one of her “ideas” into action: the embroidery of a tapestry depicting the history of Tilling, one that will surely surpass Bayeux’s. All Lucia’s subjects are called upon to labour long and hard in its execution. Meanwhile Elizabeth, stranded in Southampton, happens upon a game of Monopoly in her hotel room, and—minus her broken-winged chariot—hurries home to rescue her fellow Tillingites from the tedium of Lucia’s latest worthy endeavor. Who will prove the greater master of Monopoly? What will become of the abandoned tapestry? Is Elizabeth really descended from Norman nobility? Is Mallards haunted, and if so, who saw the ghost first—Lucia, its current resident, or Elizabeth, its former owner? It is not in the best interests of the Tillingites to allow either woman to prevail for long. For in the end, Lucia and Elizabeth’s tactical maneuvering and petty victories and defeats offer the best entertainment in town. Originally published in 1986, Lucia Triumphant is the second of Tom Holt’s officially sanctioned sequels to the hilarious “Lucia” novels of E.F. Benson.
Available ebook formats: epub mobi pdf rtf lrf pdb txt html
First 20% Sample: epub mobi (Kindle) lrf more Online Reader
pdb
Price: $6.95 USD
Buy Add to Library Give as a Gift
How gifting works
Create Widget
Tags: tilling ef benson lucia postwar england
About Tom Holt

Tom Holt was born in 1961 in London, England. His first book, ‘Poems By Tom Holt’, was published when he was twelve years old. While he was still a student at Oxford he wrote two sequels to E F Benson’s Lucia series. After an undistinguished seven-year stint as a lawyer, he became a full-time writer in 1995 and has published over thirty novels. Tom lives with his wife and daughter in the west of England. As well as writing, he raises pigs and pedigree Dexter cattle.

You have subscribed to Smashwords Alerts new release notifications for Tom Holt.

You have been added to Tom Holt's favorite list.

You can also sign-up to receive email notifications whenever Tom Holt releases a new book.