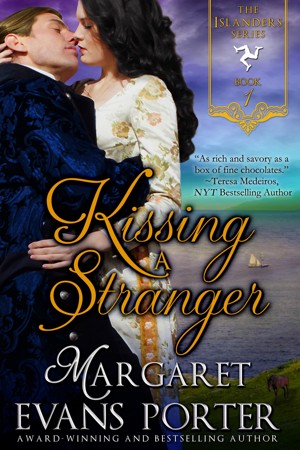 Lady Lavinia Cashin and her father, an impoverished earl, leave their crumbling castle on the Isle of Man. To ensure her family’s survival, Lavinia must swiftly find a wealthy husband in London. When her father is arrested for debt and lands in the King’s Bench Prison, necessity forces her to accept help from unexpected and possibly untrustworthy sources.

Shunned by society, the infamous and reckless gamester Lord Garrick Armitage is attracted to the mysterious Manx beauty from the moment he sees her. In London’s ballrooms, during a Christmas house party, on the hunting field, and at a Newmarket race meeting, he is ever more convinced that Lavinia is the girl for him—even if she doesn’t realize it. Despite lacking the fortune she requires in a suitor, he cannot stand aside and watch her make a marriage of convenience devoid of the love and passion they share.

Lavinia must take drastic measures to save her family—and risks losing Garrick forever. And neither can guess whether her desperate return to the Isle of Man will turn out to be a journey towards happiness or heartbreak.

“As rich and savory as a box of fine chocolates.”
Teresa Medeiros, New York Times Bestseller

“A fast-moving story with twists and turns that will keep you enthralled.”
Rendezvous

“A wonderful tale of the triumph of love in the face of adversity.”
America Online

“Unique characters, a surprisingly atypical plot and a writing style that moves gracefully from start to finish. Don’t miss it!”
New and Used Books

“A must-read…Margaret Evans Porter is a writer to watch, and it shows!”
Affaire de Coeur

Also in Series: The Islanders

You have subscribed to alerts for Margaret Evans Porter.