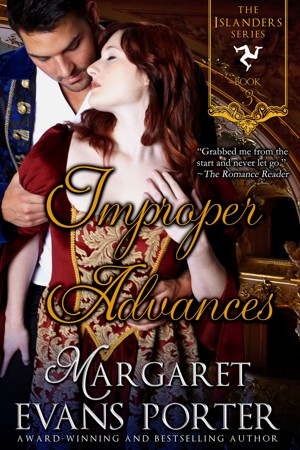 For gifted singer Ana St. Albans and mine owner Sir Darius Corlett, duty is at odds with desire. Each dares to dream of a future together though they are divided by her reputation—and his respectabiliity. More
From highly acclaimed and bestselling author Margaret Evans Porter, the third novel in The Islanders Series—in which lovers’ private passions conflict with their professional demands, and duty is at odds with desire.

Escaping a scandal she did not cause, gifted singer Ana St. Albans abandons the London stage—her lifelong home—for refuge and solitude on the Isle of Man as Oriana Julian, soldier’s widow. Her landlord, wealthy mine owner and geologist Sir Darius Corlett, suspects she’s an adventuress and a fortune-hunter. In her loneliness, Oriana responds to Dare’s advances.
Certain that her indiscretion will have no lasting consequences, she returns to London.

Pursuing her, Dare thrusts himself into her world of musicians, aristocrats, horse-racing enthusiasts, and the prominent scientist who can help him promote his geological theories. Oriana’s passionate affair with the bold Manxman coincides with a difficult choice—marriage to a wealthy peer, or a coveted position at the opera house. But neither tempts her as much as the even more impossible fate prevented by her reputation—and Dare’s respectability.

“Grabbed me from the start and never let go…
intelligently written and impeccably researched.”
The Romance Reader

Brimming with complex yet enjoyable characters, an interesting and fast paced plot with plenty of twists and loads of sensuality…a well-written and very charming read.” Reader to Reader

“Ms. Porter has created dynamic characters, who are all the more moving for dealing with their flaws.” Romantic Times

“The protagonists have such strength of character they must be admired....I highly recommend Improper Advances as a read that shouldn't be missed.” Rendezvous

“The chemistry between Dare and Ana is wonderful, as much for the luscious lovemaking as for the lively, humorous and intelligent conversation between them. The tale that leads these lost souls to each other is warm, witty,
and engaging and certainly, not to be missed!”
All Romance Book Store

Also in Series: The Islanders

You have subscribed to alerts for Margaret Evans Porter.