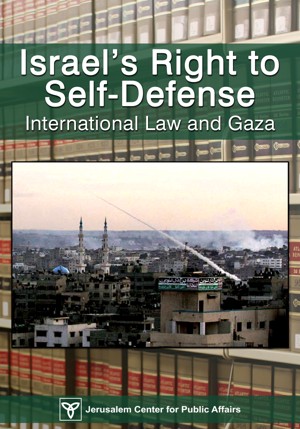 The broad questions discussed include the law of armed conflict, proportionality, asymmetric conflicts, self-defense, accountability, and "lawfare." More specific topics include the work of the Goldstone Commission, "civilian" casualty figures from the Gaza war, Israel's naval blockade, and the supply of utilities and goods to Gaza.

The Jerusalem Center for Public Affairs is an independent, non-profit think tank for policy research and education, bringing together the best minds in the political, strategic, diplomatic and legal arenas in Israel and abroad. The Center is led by Israel's former UN ambassador Dr. Dore Gold.

You have subscribed to alerts for Jerusalem Center for Public Affairs.

Would you like to favorite Jerusalem Center for Public Affairs?

You have been added to Jerusalem Center for Public Affairs's favorite list.

You can also sign-up to receive email notifications whenever Jerusalem Center for Public Affairs releases a new book.