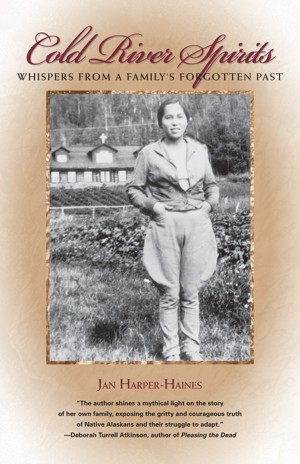 By Jan Harper-Haines
Cold River Spirits is a wryly humorous and inspirational story about a proud Alaska Native family struggling to survive in two worlds. Sam and Louise Harper and their ten children make a soul-grinding transition into a modern white-dominated society where they face bigotry, poverty and illness.
The author explores her family's powerful conflicts between the past and the future.

Jan (Petri) Harper-Haines was born in Sitka, Alaska, of Athabascan, Irish, Russian and Dutch descent. In 1990, she began gathering oral histories about her mother and grandmother's lives on the Yukon River. The family memoir grew out of these early stories. Jan earned a bachelor's degree from the University of Alaska Fairbanks, where in 1935 her mother, Flora Jane Harper, was the University's first Alaska Native woman to graduate.
The author’s short stories have appeared in magazines and literary publications.
Jan is a former secondary education teacher and has also had a twenty-year career in advertising and marketing in Honolulu and San Francisco. She lives in Marin County, California, with her husband, Larry, an architect. For more information visit www.harperhaines.com

You have subscribed to alerts for Jan Harper-Haines.

You have been added to Jan Harper-Haines's favorite list.

You can also sign-up to receive email notifications whenever Jan Harper-Haines releases a new book.