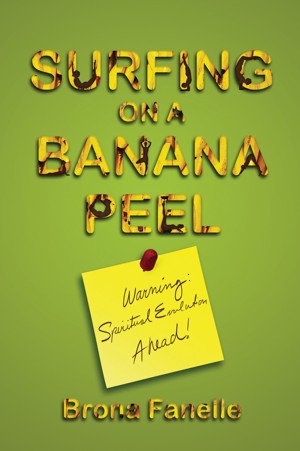 Surfing on a Banana Peel: Warning, Spiritual Evolution Ahead!

The first part of SURFING ON A BANANA PEEL, the narrator focuses too much on the physical circumstances of her life. She is angry and disappointed by lies and manipulations she used to genuinely believe. She separates seed from chaff in all areas of life and fills trashcans with the unneeded, not realizing the positive impact the whole disaster will bring. This, part one, also extensively describes alternative methods to preventing cancer and other diseases. The first part is narrated in past tense, symbolizing the outdated state of mind and her efforts to overcome it.

The American Brona Fanelle was born in a small European country of Czech Republic where she has earned a Master’s degree in Literature and Social Science. She began her professional career as a teacher and later became a news anchor and editor.

She has traveled Europe and the United States collecting experiences that ultimately transformed her life. She had the opportunity to know and experience many different religions, spiritual paths, mystic energies, modern psychologies and parapsychological methods. Brona also studied different types of life styles and natural healing practices.

Then Brona’s mother was diagnosed with cancer. However her mother’s serious medical condition and the knowledge obtained on the journey to cure her unexpectedly opened a new door… she passed through and began an expedition on an entirely new spiritually-natural path. This experience not only led her to a sublime tomorrow, but she also discovered how to be the director of her own life, without karmic surprises, illnesses and suffering. It is the solution of everything for everyone, regardless of age, medical condition, profession, wealth or anything else.

Brona Fanelle is a mother of two daughters and she lives with her partner on the coast of California in Santa Monica.

Reviews of Surfing on a Banana Peel: Warning, Spiritual Evolution Ahead! by Brona Fanelle

You have subscribed to alerts for Brona Fanelle.

You have been added to Brona Fanelle's favorite list.

You can also sign-up to receive email notifications whenever Brona Fanelle releases a new book.