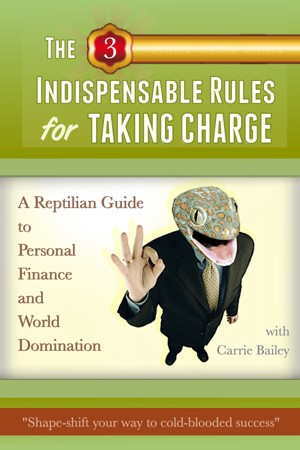 The 3 Indispensible Rules for Taking Charge: A Reptilian Guide to Personal Finance and World Domination

By Carrie Bailey
Rated 5.00/5 based on 2 reviews
A tell-all book about the Reptilian conspiracy and indispensable guide to world domination...fact or fiction? Whichever, this mysterious cold-blooded overlord has answers for all your megalomania needs. More
"We cannot eradicate the most profound emotional connection between an ape and his ultimate purpose in life. We can only confuse them and divert them from their destiny to achieve our ends."

A little known author seeks advice from one of the world's most powerful men, but instead of getting the canned speech about hard work that she was expecting, she uncovered a secret conspiracy conducted in cold-blood. Intrigued by the reptilian's plan to team up with "hairy little meatbags," they soon begin their endeavor to redistribute the global balance of power.

Carrie Bailey is a dystopian author who lives in New Zealand. She's originally from the Pacific Northwest and started writing stories at age thirty based on the post-apocalyptic games she invented as a child. For fun, she watches sci-fi with her teenage son, drinks a lot of coffee and actively researches new ways to eat pineapple.

Reviews of The 3 Indispensible Rules for Taking Charge: A Reptilian Guide to Personal Finance and World Domination by Carrie Bailey

Review
The 3 Indispensable Rules for Taking Charge (Fantasy) #7
Review By: nathansscififantasyreview
This is a plot summary and a few of my thoughts about this fantasy novel. This story is about our reptilian overlords and how they control every facet of our world. Hopefully we will be able to change things for the better in the near future. I'd say that this book is for any level fantasy fan. It's so short that even a beginner fantasy nerdlet could handle it, yet it addresses serious topics that will appeal to more experienced fantasy dorks.
Winonah Drake reviewed on March 20, 2013

Why are there so many conspiracy theories out there? Most are obviously a grown-up version of the monsters and spooky places we feared as children. If only the Reptilians in this book were that easy to dismiss! Author Carrie Bailey (my younger sister), interviews a Reptoid, one of adulthood's bogeymen, to learn what she could about their goals on Earth. While their ultimate goal is simple, their methods will keep any reader fascinated until the end. Using the same mix of excellent storytelling and philosophy that she perfected to delight and scare me since we were little, Carrie's interview with a non-human will enlighten anyone to how human nature creates-and can destroy-its own worst fears.

"Lately, we've just been sitting around a wheel giving it a spin. The wheel goes around and around and lands on the name of unknown, untalented, unpleasant, usually mildly deranged young ape. The "challenge" of this game is making those untalented wretches famous. No challenge left! A potted plant could become the next pop star. I'm so bored, I'm willing to do a jigsaw puzzle of a jigsaw puzzle."

The book is set up as a self-help book, written in the first person, by a "reptilian" who explains exactly what his people do, and how we can overcome their control and be "liberated." Well, as much as we "primitive hairy monkeys" can be. I was simultaneously disgusted by the reptilian "author's" narcissism, and yet intrigued with what he has to say, because I don't disagree that some apes - humans - really are small-minded, un-evolved creatures. His patronizing manner, along with just the right amount of snark made him an enjoyable narrator of this projected world of human subjugation. He wants to help us. He wants us to be pets, rather than food (except for the clergy!).

In the the most basic sense, the book is a comedic jab at how people live their lives without thinking for themselves. However, I was more than a little pleased to see that it was far deeper and scathing a mirror of society; a true satire, in the original sense of the term. It's this fact that drives me from "really liking" this book to absolutely "loving" it. It's intelligent. The psychology of it all is cleverly crafted, and seems genuinely sound at first glance.

"For the noble reptilian, only liberty is a viable end goal. Our cold blood motivates us to make our own choices, not to choose who to agree with or what to agree on, but to be the master of our own destiny. We control the future. We never submit. We only control."

The idea that anyone -- reptilian or human -- operates like this is disconcertingly believable because, in many ways, people do operate like reptilians. This guide has oddly thought-provoking ideas on liberty, and what it really means to be free, instead of what we've been told "free" is. At first, Donald Trump and other business psychopathic personalities come to mind, then I realized what it really reminded me of: Scientology. It might as well be a beginners' guide to starting a pseudo-religious, financial cult. If that doesn't scare you, I don't know what will!

I'd recommend this book to anyone who is interested in psychology, science fiction, or satire. Actually, I'd recommend it to anyone who likes to think, and enjoys a good laugh while doing so. It's rare to see something like this on the shelf these days!

(reviewed 14 days after purchase)
David Bailey reviewed on Oct. 31, 2012
(no rating)
Wow... A good read. Makes you wonder if what is being written about is real.

You have subscribed to Smashwords Alerts new release notifications for Carrie Bailey.

You have been added to Carrie Bailey's favorite list.

You can also sign-up to receive email notifications whenever Carrie Bailey releases a new book.