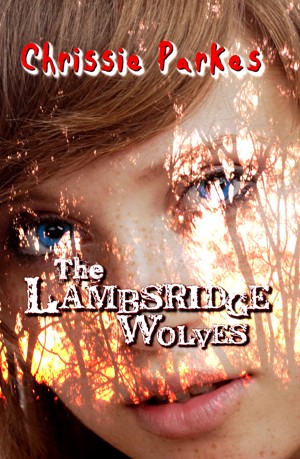 Chris Parker writes real stories for young adults. Inspirations come from nature, families and, of course, the wolves.
Even though you think you can spot them, the wolves are masters of disguise. They use stealth and camouflage to pass undetected through our world.
Although they choose to avoid humans at all costs, beware. Sometimes they take an interest in one or two special humans. Then, before you know it, it's too late to stop them...

Twelve year old Hazel Shepherd, her older brother Jed and younger sister Molly, are reluctant parishioners of Lambsridge; a tiny hamlet way out in the Welsh countryside whose claim to fame – and infamy - is the wolf sanctuary within Lambsridge woods.
Hazel yearns for the bright lights and buzzing teenage camaraderie of Newtown, though she and her fellow ‘Lambers’ fall way short of acceptance from the Townies at Newtown school.
Her estranged parents harbour secrets about their tempestuous relationship; secrets that revolve around the sinister Lambsridge traditions Hazel and her siblings are forced to endure by their mother and brutish Uncle Bleddwyn.
For three days each month the women and children of Lambsridge are locked in the church within the boundaries of the wolf sanctuary, whilst their men – and a few women, including Hazel’s mother – go on the ‘hunt’.

Enough plot giveaway! Albeit written for a young adult readership, I think this book will be enjoyed by all ages. I thoroughly lapped up the first in the Lambsridge series and found myself turning pages with eager anticipation. The story is told, for the most part, by Hazel; a bright, insightful young girl with a tough, defiant side to her nature. Her masterfully drawn character draws you along her tumultuous journey to discover the truth about her mother’s irrational obsession with the hunt and the secrets hidden within the fences surrounding Lambsridge wood.

This is a beautifully crafted tale with solid, visual characters that you can love and hate. Masterfully paced, with moments that we can all identify with in some way, the reveal unfolds with tantalising expectation.

My only tiny disappointment was that I would have liked to ‘hear’ more from Hazel’s woodland admirer, from a more simply ‘lupine’ point of view. She is perhaps a little too mysterious and silent throughout, given her crucial involvement at the end of the story.
But, having said this, I look forward to finding out how the relationship develops in the next book.

All in all, a superb read!

I received this book from the author in exchange for an honest review.
Let me just say it’s an interesting book. When I first received it, I thought it will be another one about wolves like all the others, but I was wrong. It’s full of surprises, well written and you can tell the author made researches about wolves.
The story starts with Hazel Shepherd, a twelve years old girl who just moved back in Lambsridge and trying to fit in, like any other teenager. She goes to school in the city but the biggest concern for her is the bus journey, it’s a nightmare for every „Lamber” because of the townies. Things quickly take a turn of events as Hazel discovers that there is a sinister side of her village, a hidden secret that will test her limits and make her deal with a lot of problems.
I liked the way Hazel behaved sometimes, she was very mature for her age and she didn't act like a little kid, as I was expecting. She faces her problems and she tries to manage them. The hole book surprised me. There was a lot of mystery and suspense in the story that kept me guessing everything and the climax itself is superb and adds a real new twist to a genre that was getting predictable. This is the debut novel of Chrissie Parker, it’s a fabulous book, a well written book, with characters that are brilliantly balanced. I recommend you read this, it’s brilliant and it deserves good readers. Thank you for this awesome story Chrissie!

Although not the typical genre I would read I really enjoyed this teenage supernatural story. The suspense filled mystery build up from page one until the end with the possibility of a follow up.

I met Chrissie Parkes through Bookblogs when she requested reviewers for this book. The blurb on Smashwords intrigued me and I mailed her.

We met a twelve year old that for the duration of the book seemed more like a twenty something young woman. Her circumstances forced her to be mature, thinking like a grown up to protect her family. Her clear objectives and thoughtful observations struck you from the get go and a few times I had to make sure that it was infact a twelve year old girl's view.
The grown ups, especially the mother with her tantrum filled personality really annoyed me. It seems her way of conversation was to scream, frankly that just do not "gel" with me. She knew the answers to all the frightful things going on in the village but instead of being subtle and protecting her children added to the fear and worries of Jed, Hazel and Molly.
The absent father quivered away not taking up the responsibility of fatherhood and is easily manipulated and threatened. While he knew what his children were facing.
Trapped in a world of secrets young Hazel is faced with normal teenage growing pains, fitting into a world she does not belong. Joining the Running Club to protect a friend she makes more enemies then friends. Her young friends trying to protect her while she tries to understand what is going on in her family life and why her family is falling apart.
While the wolves is kept in the back ground, caged in a reservation and kept at a distance with no idea why they are so important to her or the "Lambers" the village she lives in, set apart from the rest of the world. The unusual church life the center of this village that borders on cults, over protective of their secrets and way of life allowing no outsiders in.
Since no grown up is willing to be honest she has to find her own answers that lead her into trouble each time. Her contact with the wolves the high light of the story, drawing you in and keep your intention to the very last page.
A very good clean read for teenagers that loves mystery and the supernatural world of wolves. This is not the typical shapeshifters stories but the plot will keep you wondering till the very end. The author does not give anything away and then still you are left with questions.
Well done Chrissie Parkes.

This story starts at the doors of a small village church in the heart of mid-Wales, with the girl staring at the doors wondering how she got there and what was creeping up behind her. We then rewind back a number of months and follow Hazel and she and her mother, brother and sister deal with moving back to Lambsridge following the breakdown of her parents marriage. At first everything seems as normal as can be expected with HAzel's biggest concern being how to deal with the school bullies. But things quickly take a turn to the unexpected as the quaint village tradition shows it has a more sinister side, one that will test Hazel to her limits and put her and her family in danger.

This is a very well written book and pitches itself almost perfectly at the target age group although I must admit there were one or two moments where Hazel's behaviour didn't quite fit with her age (to be honest that could just be me as when I think of 12 year olds I remember what I was like, not what they're like today...it seems they don't go out and play as much as we used to). The characters are really well written and brilliantly balanced with characteristics that anybody would recognise in themselves and their own families and friends. The mystery and suspense of what is happening in Lambsridge is brilliant and keeps you guessing and second guessing throughout and the climax itself is utterly superb and adds a real new twist to a genre that was getting a little predictable. A great read and a series I am definitely going to follow (the big kid that I am).

Lambsridge Wolves is a fast-paced read that is hard to put down; the tension and the mystery are masterfully built with each chapter. Excellent foreshadowing and suspenseful clues have the reader guessing, along with the main character, as to what is going on in this remote village and what secret the adults are keeping from their offspring. The exciting climax and resolution satisfies the reader and changes the protagonist forever, concluding her character arc for this story. But Hazel Sheppard is drawn with enough depth and different facets of personality that one can easily see her life and adventures continuing.

You have subscribed to alerts for Chris Parker.

You have been added to Chris Parker's favorite list.

You can also sign-up to receive email notifications whenever Chris Parker releases a new book.