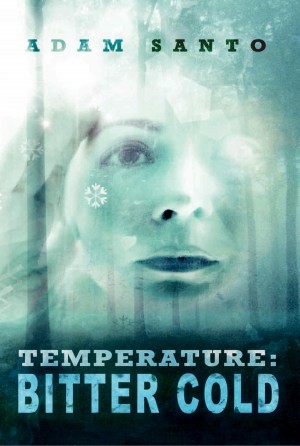 Adam Santo is a SciFi/Fantasy writer who enjoys the quiet moments of everyday life to writing stories. His debut novel, Temperature: Dead and Rising, offering a newly twisted tale about zombies that took the world for a ride they would soon not forget. Santo began plotting out the second paperback novel, Temperature: Bitter Cold, before the ink dried on his first book. Santo continues to write nonstop because he knows there is always a story waiting to get out.

When he is not writing, Santo enjoys quality time with his family and friends, spending the occasional weekend at a movie theater, and reclaiming his youth when his son challenges him to a video game. Santo currently resides in sunny Florida with his beautiful wife and equally beautiful children.

Temperature: Bitter Cold Book Trailer
Sally must fight for her life, only to lose her closest friend. The church has kidnapped Sally for their own evil purpose, but there is more to worry about once she escapes.

I was lucky enough to be gifted a free copy of this in exchange for an honest review.

***If you have not yet read the first book in the series, "Temperature: Dead & Rising" do not continue reading this review, as it contains spoilers inherent to book one.***


Sally has just been kidnapped by The Church's goons right before Bo's eyes. She hadn't been swatting at mosquitoes, she'd been swatting at tranquilizer darts! She wakes to find herself tied up, wearing yet more damned gold handcuffs, and in a moving vehicle. Her plans to pretend she is still knocked out are spoiled when the vehicle hits a bump and causes her to make a small exclamation of sound. This promptly brings one of the goons back with a syringe, which he stabs into her shoulder, presses the plunger & under she goes again. When next she wakes Sally is on a plane, still tied up and wearing the gold handcuffs.

Demric, The Church's equivalent of middle management, had Sally brought to to an old church in the middle of nowhere, Scotland. Next to the church is a cemetery, and below are catacombs dating back hundreds of years. Derrick and his henchman Von plan to torture Sally to death repeatedly, as they are well aware there is only one way to really stop any of the undead. But they know that Sally is special, and therefore they plan to take her apart piece by piece to find out just what it is that makes her so powerful.

Meanwhile Bo had run back to the southern camp in the hopes of catching Adelwin before he departed for home. One his way he runs into the witch Zemra, who convinces Bo that she knows the best route to catch Adelwin . Though Bo hates witches with a burning passion he is more afraid for Sally, and so he agrees to travel with her. He can't really figure her out, her stories have her swinging from being ruthless and only concerned with herself to sounding as if she actually has a heart and is capable of compassion for others. After numerous trials they connect with Adelwin, who somehow knows where Sally is being kept and gives Bo the means to get there, hopefully in time to help save her.

During all of this, Sally is being sadistically tortured, being asked for answers she doesn't have. Demric refuses to listen her repeated pleas for mercy. Being an accomplished liar, Demric assumes everyone else is as well, which is why he is so sure Sally is lying to him. Plus he believes dishonesty to be the true nature of the undead, and since Sally is one of them she must be lying to him. He is not worried though, for he believes he has plenty of time to experiment upon her, and is sure she will talk eventually.

Sally manages to escape & meets Bo on the road leading from the church. He was stuck waiting outside as he can't enter a church so close to a cemetery, not too mention above catacombs, since cemeteries put all undead into 'perma-sleep' until someone removes them from the cemetery. Sally appears to be the only undead exception to that rule.

The two begin a wild ride in an attempt to return to Colorado's northern camp. Being waylaid by werewolves, Reapers, and a demigod are just a few of the challenges they must overcome if they are to make it back home. Will they survive all of these different challenges? Can they manage to keep from being separated along the way?

Once again Mr. Santo has created an ingeniously wild ride for the readers, crafting a story that will keep you in its grip to the last word, leaving you disheveled and maybe a tad disoriented, but crystal clear about one thing. . . You, eagerly awaiting the release of the next book.

(reviewed 6 days after purchase)
Tiffany Calderone reviewed on May 21, 2013

An interesting twist to the idea of Zombies. No - longer the bottom feeders of the preternatural set (that would be the Vampires). unfortunately I did not read the 1st of the series so it did take me a while to get the pieces to shape into a whole, example the characters prologue did not come back into play until you were half way through the book. And as will all good series, one is left with needing to find out what happens next to our heroine and white knight and who really is the bad guy the demi-god or the grim reaper here?

You have subscribed to Smashwords Alerts new release notifications for Adam Santo.

You have been added to Adam Santo's favorite list.

You can also sign-up to receive email notifications whenever Adam Santo releases a new book.