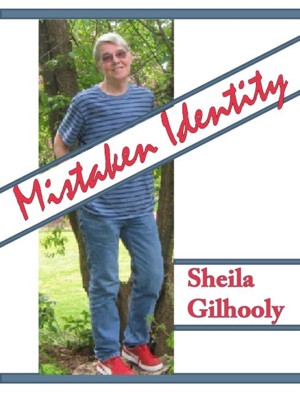 But does she want to look like a man? No. Sheila Gilhooly claims her place as a woman--who routinely gets mistaken for a man. In Mistaken Identity Gilhooly tells stories of encounters in change rooms and washrooms, with gun-drawn security guards and surly police, who all react badly to discovering they’ve made a mistake about her gender.

Sheila Gilhooly is a woman. More
When was the last time you encountered someone whose gender you couldn't identify?
The experience is disconcerting, maybe frightening.
That is gender shock.
These are stories from the life of a woman who is often mistaken for a man. Sheila Gilhooly writes of encounters in change rooms and washrooms, hospitals and police cars, with strangers and people in authority, who all make the same mistake. They think she is a man.
They experience gender shock. She has to deal with their reactions.
Gilhooly writes with a wry sense of self, and a combination of vulnerability and pride in her identity that leaves a lasting impression.
Available ebook formats: epub mobi pdf rtf lrf pdb txt html
First 25% Sample: epub mobi (Kindle) lrf more Online Reader
pdb
Price: $2.98 USD
Buy Add to Library Give as a Gift
How gifting works
Create Widget
Tags: queer lesbian woman female feminine transgender masculine dyke butch gender variant
About Sheila Gilhooly

Sheila Gilhooly is a 60ish lesbian who has lived in Vancouver (Canada) since 1981. She was part of the dyke exodus from Ottawa, where she was born and raised. She told the story of being locked up in the mental hospital for being queer in the classic lesbian art show and book Still Sane, produced in collaboration with sculptor Persimmon Blackbridge.

You have subscribed to alerts for Sheila Gilhooly.

You have been added to Sheila Gilhooly's favorite list.

You can also sign-up to receive email notifications whenever Sheila Gilhooly releases a new book.