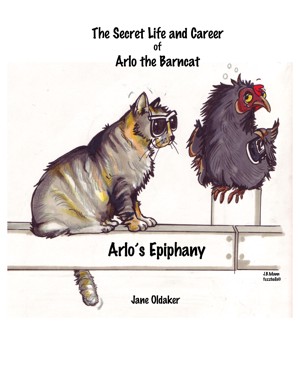 By Jane Oldaker
Rated 3.31/5 based on 13 reviews
An installment in the Secret Life and Career of Arlo the Barncat, feline covert operative More
Arlo the barncat's latest misadventure has him doubting both his vocation as a covert operative and the true sentiments of his closest friends. Will Mahoney interrupt his nap time long enough to change Arlo's mind? Or will Agent Brenda Chicken peck Arlo one time too many when he retrieves his StealthBerry causing him to turn his back forever on a brilliant secret life and career as one of the greatest feline spies history has ever known?

Born and raised in Toronto, Jane escaped to the family farm near Port Perry, Ontario at the earliest opportunity where she lives with her husband, daughter and an assortment of cats, dogs, chickens and horses. 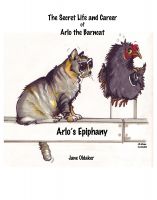 Also in Series: The Secret Life and Career of Arlo the Barncat 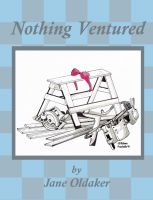 Lovely book. A bit hard to follow in places and I would have preferred more about the Epiphany but otherwise a good read

(reviewed 19 days after purchase)
Douglas Spencer Wallis reviewed on Nov. 27, 2015
(no rating)
When secret agent Arlo is subjected to a gratuitous attack from an unscrupulous well-known thug his career is thrown into question having sustained injuries in an non operational encounter. Whilst his self-confidence is severely damaged, to the extent he seriously considers withdrawing from the secrat service, his fellow agents plan a revenge on his adversary. In a series of claw biting actions they execute a coordinated action to inflict retribution and humiliation on the dastardly animal. This is a tail gripping story that makes the fur stand on end and finishes in a suitably crushing, fur flying.....but I will not spoil it for you. You must read this book.

(reviewed the day of purchase)
Darlene Hintz reviewed on Nov. 17, 2014

Arlo's Epiphany by Jane Oldaker. The 1st in a series, but the second book that I have read. I paid a little more attention to the background material that I missed in this book to fill in the blanks that I had when I read [The Cat Who Spied on Me]. I am enjoying the series. I admit I have to remind that these are the furry critters that are involved.

A fun series and a chuckle or two are to be expected.

I recommend this book and the series.

(reviewed 6 months after purchase)
rmurdock60 reviewed on July 29, 2014
(no rating)
I loved the concept of Arlo's Epipany, and found the storyline entertaining. If the narration was trimmed just a bit, it would shine even more. I had to start to read it over again a few times, as the first few pages just didn't pulll me in, but once I persevered It was worth the effort. A nice take on how to handle bullies.

I loved the concept of [Arlo's Epiphany] by [Jane Oldaker] but it could have been so much more. It was a cute story about a secret agent barncat and the lesson he learns about friendship. I would have liked this to be expanded to a novel because there is so much that can be done with the ideas and characters.

I was given this book in exchange for an honest review.

I loved the concept - had me thinking along the lines of cats vs dogs, but a grown-up version. There were some typos but it is an easy quick read. The only complaint I have is the author tried hard making sure readers knew the agents were smart by using "big words" a lot. Some of that pulls you away from the story. So while I liked the story I was not drawn in like I want to be as a reader. Overall great story and I will be reading more from this author.

This is a cute "secret lives of animals" short story. Engaging characters, entertaining storyline, and lots and lots (and lots) of narration. It includes one of the most hilarious chase scenes I've ever read, one of the best feline secret agents ever, and if the narration were trimmed down some this would easily garner four stars. As it stands, let's call it 3.5 stars.

I received a free copy of this short story through the LibraryThing Member Giveaway program. Thanks for the fun read, Ms Oldaker.

This is a book that is short but has several strong messages. 1. Friends are around even if you believe they are not 2. Bullies are not just humans.

There is no backstory so I wondered how the animals communicated with each other and the humans.

Overall, as an adult, I enjoyed the story. I do not think it was written for children.

Arlo's Epiphany by Jane Oldaker is a short, little story starring Arlo the Barncat. Arlo is different from your average cat or dog though. He's a covert operative working for the Agency.

What is the Agency? And why was it founded? Well all over the world there are villains and these villains train animals to be villainous and perform villainous deeds (enough with the villainous). So of course an opposing force had to be created.

Like all Agents, Arlo can talk to various species (including humans). The Agency employs its own medical expert, Dr.Phelps, who works undercover as a vet. They also have handlers. Arlo's is Charlie, who debriefs him after every mission. Arlo himself is a "technocat". With his Stealthberry and skills, he's a wizz at all things technical and generally and all round fantastic agent. There is only one aspect that he falls short on- thuggery. Yes he can walk the walk, but not talk the talk.

This worries his old friend (and retired agent) Mahoney. A mature, feral tomcat, his reputation precedes him and none dare mess with the infamous Mahoney. But when Arlo comes visiting and claims to have been attacked (with the bite marks and missing fur to prove it), Mahoney suspects none other than his long-time rival, McTavish. This attack has his MO all over it, but Mahoney must follow Agency rules and they clearly state he is not allowed to attack non-strategic animals. Maybe he can find a way around that rule without actually breaking it?

A fun, little story with plenty of character. Any animal can be an Agent, so we get hilarious characters and situations, such as Agent Brenda Chicken- who can peck with the speed of a striking cobra.

I'm not entirely sure what age group this book is intended for, however. My natural instinct would be younger readers, but there are some rather large words for small children. For example, here are some words I can see younger readers having problems with; avuncular, sporadically; incorrigible; insouciance to name a few. While I realise this could be a good method to teach children what these words mean, I still hesitate to say this is a book for small children.

Also, Arlo may be the name on the cover, but it is Mahoney who we see through the eyes of for most of this book. Not that that's a bad thing (and it may only be in this book that this occurs). I'm assuming this will be a series and we'll hear more from Arlo and friends in the future.

We do get a couple of nice illustrations of a few characters that are pleasant to spy as you scroll through the pages.

I found the subject a little familiar too. For anyone who has ever read the Hank the Cowdog series, you will probably realise what I'm talking about. However, the main difference (aside from the characters and situations being completely different) is that Hank just believed himself to be "Head of Ranch Security", but Arlo actually is an Agent. He can talk to animals and humans and do all the stuff we read about. It's not the fantasy of an imaginative cat.

There are some nice characters that make this book worth the read. If you're interested, why not give it a try?

Disclaimer: This book was sent to me by the author. This is not a sponsored review. All opinions are 100% my own.

Arlo's Epiphany by Jane Oldaker is a fun story about the imaginary adventures of a barn cat and his encounter with a local bully. Readers of all ages can connect with the characters as they grapple with the consequences of this event.
This book is a great tool for initiating a discussion with children about responding to bullying.

You have subscribed to alerts for Jane Oldaker.

You have been added to Jane Oldaker's favorite list.

You can also sign-up to receive email notifications whenever Jane Oldaker releases a new book.