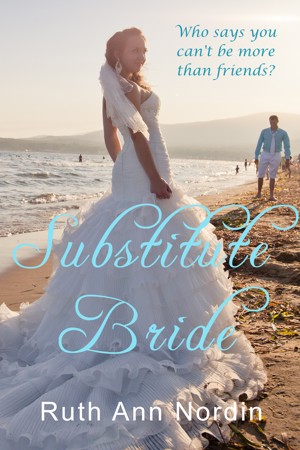 Rated 4.75/5 based on 4 reviews
Disclaimer: Substitute Bride used to be under my pen name Kate Page.

Kevin Edwards stands to inherit one million dollars. The catch? He must get married by Valentine’s Day. And he chooses Tammy who is all wrong for him. Can his best friend, Alexandra (Alex) Dixon, convince him that things will be much better if they become more than friends or will he say “I do” to the wrong woman? More
Disclaimer: Substitute Bride used to be under my pen name Kate Page. I have decided to get rid of Kate Page to simplify my life. So I am republishing it under the name Ruth Ann Nordin.

Kevin Edwards stands to inherit one million dollars. The catch? He must get married by Valentine’s Day. With only a month to spare, he seeks out the first woman who catches his interest: Tammy. But his best friend, Alexandra (Alex) Dixon, is convinced he’s making the biggest mistake of his life. So she decides she will take Tammy’s place and be his bride instead. Can she convince him that things will be much better if they become more than friends or will he say “I do” to the wrong woman?
Available ebook formats: epub mobi lrf pdb
First 20% Sample: epub mobi (Kindle) lrf more
pdb
Price: $0.99 USD
Buy Add to Library Give as a Gift
How gifting works
Create Widget
Tags: romance love comedy humor sex contemporary best friends wedding bride
About Ruth Ann Nordin

Great story!! I married my best friend 24 years ago!! Love these types of stories

Substitute Bride by Ruth Ann Nordin
Alexandra 'Dixon is just one of the guys. Hanging out, playing and watching sports, etc. When her friend Kevin needs to marry within a month to get an inheritance his aunt left him, Alex tries to help him pick the right gal but he picks one that is all wrong for him and their friendship. Now Alex has to decide how far she’ll go to stop this marriage….even if it includes acting like a girl.

Kevin Edwards can’t imagine his life without his best friend Alex. He has chosen to marry Tammy as she’s pretty and he already likes her. He don’t believe he’ll lose Alex as a friend, he won’t allow it. Goes to show you how little this guy understands about the workings of the inner minds when it comes to women!

Ruth once again brings to life some lovable characters….and an the unlovable ones as well. This was a shorter book to read but lacking in nothing. Once again showing the reader that sometimes the best things are right in front of us….so close we can’t see them.
**Sexual situations within marriage
http://justjudysjumbles.blogspot.com/2011/09/ruth-ann-nordin.html#