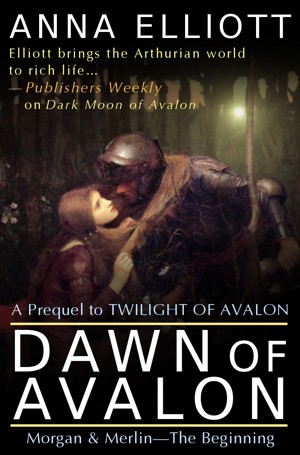 By Anna Elliott
Rated 4.60/5 based on 5 reviews
He would become the most powerful wizard in the history of Britain—Merlin. She would become Britain's most storied sorceress—Morgan le Fay. But before they were legends, they were young. And they were lovers. Together, in the sunlight of one day long ago, they saved a kingdom. Dawn of Avalon. A stand-alone story from the universe of Anna Elliott’s Twilight of Avalon.
Download: epub mobi (Kindle) pdf more Online Reader
rtf lrf pdb txt
Price: Free! USD
Add to Library
Create Widget
Tags: merlin sorcery wizard britain morgan sorceress wizardry arthurian legend arthurian arthurian myth and legends arthurian myths and legends arthurian legends arthurian romance dinas emrys vortigern uther pendragon
About Anna Elliott

The daughter of two English literature PhDs, Anna Elliott grew up in Connecticut in a house filled with books. She is a longtime devotee of historical fantasy and fell especially in love with Arthurian legend and Celtic history while at university. Anna now lives in the Washington, DC, Metro area with her husband and two daughters. She likes Jane Austen, British TV, Castle, Firefly, The Big Bang Theory, sewing toys for her children, and rainbows and unicorns, especially those drawn by her daughters. Mosquitos love her.

Reviews of Dawn of Avalon by Anna Elliott

I liked it. Story portrayed well.

Before they were famous, Merlin and Morgan le Fay were young. This is the story of the day they met and saved the kingdom they knew.

This was a short little action story with a bit of romance. Based on the description, I expected more emphasis on the relationship between Merlin and Morgan, but was content with the action-based plot.

This was a great glimpse in Arthurian tales, and left me wanting to dive into the author's full length novels.

"Dawn of Avalon" is a prequel novella to Anna Elliott's "Twilight of Avalon" series. In this story, we have Merlin and Morgan meeting in the earliest days of the Arthurian sagas -- with Merlin imprisoned by Vortigern.

As a long-time reader of Arthurian legends (and a former member of the International Arthurian Society), I can say with certainty that Elliott has researched the tales and the time period very carefully. She understands all of the relationships (which are convoluted indeed) between the characters populating the lore. She even starts where many books do not: with Vortigern's plans to sacrifice a Druid because his planned tower keeps collapsing.

I enjoyed the book, although I found some of the prose a trifle clumsy (which is why I took off one star). It's a tricky thing to write description in historical fiction where the spoken word is more archaic; sometimes authors make descriptions archaic as well, which can cause a reader to stumble a bit.

Fans of Arthurian legend are sure to enjoy this tale.

Dawn of Avalon by Anna Elliot is a prequel to her Twilight of Avalon Trilogy, which so far includes Twilight of Avalon and Dark Moon of Avalon both of which focus on the romance of Tristan and Isolde. Set in Arthurian England Dawn of Avalon looks further back at the beginning of the romance between Morgan and Merlin and establish the family relationships prior to the events of Elliott's other novels. As this novel is set apart in time, it stands alone as a complete, if short, work and it is not necessary to be familiar with the Elliot's other books to enjoy it.


Morgan is a seer and a healer who is serving in the camp of Uther's enemies with the hope of assisting in his down fall. Disguised as a young boy and assisting in the torture of an enemy soldier, she finds that her cover may be blown and must make a choice whether to save the soldier's life and risk her own or allow him to die. It is this choice and the possible consequences she can foresee which force Morgan to confront her anger and doubts about who it is foretold she will become and question her commitment to her country.


While this is, at its heart, a romance, Elliott skillfully puts us in the mind of a young woman of great power who has to make choices which impact much more widely than just herself. The novel is fast paced as the event progress and I felt swept along with the predicament the characters find themselves in. While you might expect this 'free' novel to merely advertise Elliott's other novels, it is a fully complete, stand-alone novel with an engaging plot and characters. This type of publication is one of the many hidden gems of the ePublishing industry, and one I hope many other authors will take note of.

Love. Love. Love. :) To tell the truth, I've never been a big Merlin fan, but I do respect Morgan, if not for her life-style, then at least for her strength as a woman. I love how the two are portrayed in this short prequel, the characters are rich, the attraction is grand and the ending is now my facebook status (lol). Well written material of the literary kind. ^+^

You have subscribed to alerts for Anna Elliott.

You have been added to Anna Elliott's favorite list.

You can also sign-up to receive email notifications whenever Anna Elliott releases a new book.