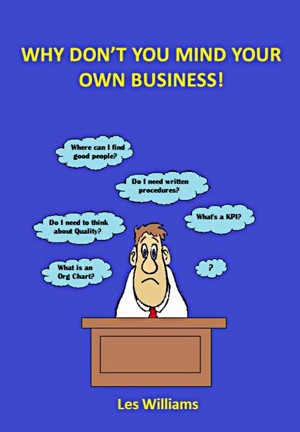 Why Don't You Mind Your Own Business!

By Les Williams
Do you operate a small to medium sized business (SME) and have you ever wondered how the big players manage and operate theirs? Are you a student or a new graduate who wants to gain a simple, basic insight into how the larger companies and organisations might structure and operate their Business Management Systems?

If so, this book may be for you! More
This book is intended to offer the reader a basic understanding of how a typical Business Management System (BMS) might be structured, applied and operated in order to manage and control your business efficiently and effectively. It is short and to the point and can be read and digested very easily and in a very short time.

Any business, large or small, will need some sort of structure or framework around which to operate and how to do this will depend largely on the size and nature of the business in question. This book will show you some of the more fundamental elements that might go to make up a typical BMS and will offer some simple help and advice on;

If you are looking for a detailed account of how you can apply and use these features, you won’t find it here; there are plenty of other books out there that will give you that. But for less than the cost of a fast-food meal and just a little of your time, you can gain a good, basic understanding of the main elements of a typical BMS, how to apply them and what they can do for your business.
Download: epub mobi (Kindle) pdf more Online Reader
rtf lrf pdb txt
Price: Free! USD
Add to Library
Create Widget
Tags: management small business sme management training business structure qms
About Les Williams

Les Williams has been a keen history buff all of his life and is fortunate to live in an area rich in Roman and Medieval archaeology, but he has a keen interest in modern history, too. He is fascinated by the human and social aspects of any period in history and especially by the political and social turmoil of the 1960’s. He has long been interested in the triumphs and tragedies of the Kennedy family and the more he read, the more intrigued he became. He found that there were lots of books on individual family members but very few that told the full and complete story of what happened to each of Joe Kennedy’s children and why. He felt very strongly that there was a need for such a book so he decided to research and write it himself. The end product of this process is his book, “The Kennedy Curse: Shattered,” which is available on Amazon in both Kindle and paperback format.

But this is just one of his many writing projects. Les is about to publish a novel set in Roman Britain and a small book on how to manage a small business. He is also working on a children’s book that he intends to publish at a later date.

In addition to his writing activity, Les also paints pop-art pictures of legends of the stage and screen and has had some success in this venture. He has exhibited (and sold work) at the official Ryder Cup Exhibition in 2012 and has sold pieces in other markets and forums, including one at Pebble Beach Golf Resort in California.

You have subscribed to alerts for Les Williams.

You have been added to Les Williams's favorite list.

You can also sign-up to receive email notifications whenever Les Williams releases a new book.