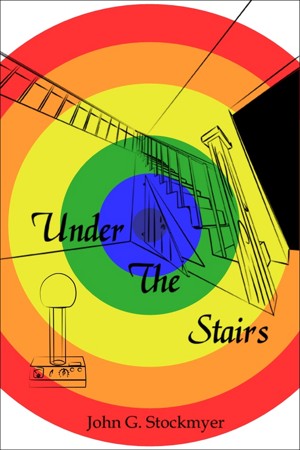 Under The Stairs - Book 1 in The Bandworld Series

Rated 5.00/5 based on 6 reviews
John Lyon, historian, new homeowner, stumbled through a gateway into an alternate reality under the stairs of his old house. And ... here he was, running a dangerous bluff; trying to pass himself off as a powerful Mage in this land that the natives called Stil-de-grain. Join John Lyon on fantastic adventures in Book #1 in the Bandworld series.
Available ebook formats: epub mobi pdf rtf lrf pdb html
First 10% Sample: epub mobi (Kindle) lrf more Online Reader
pdb
Price: $4.99 USD
Buy Add to Library Give as a Gift
How gifting works
Create Widget
Tags: adventure fantasy magic science fiction kansas city
About John Stockmyer

John G. Stockmyer (1934-2014) was an individual whose irrepressible creativity manifested itself in many ways: as a poet, teacher, produced playwright, author, co-owner of an educational materials business, creator of a time-machine simulator, and, as a podcaster and producer of eBooks. During his career he received awards for scholarship, numerous teaching awards and, as a writer, was a Thorpe Menn finalist.

He is the co-author of three non-fiction books: Unleashing the Right Side of the Brain - The Stephen Greene Press, Life Trek: The Odyssey of Adult Development - Humanics, and Right Brain Romance - Ginn Press. He is also the author of over 30 works of fiction, including the Crime/Hard-Boiled "Z-Detective" Series, and the Science-Fiction/Fantasy "Under The Stairs" Series. He has also written a quirky vampire novel titled, The Gentleman Vampire.

This series skillfully combines modern life with a fantasy world in a way that keeps you wanting more. From book to book, a new adventure emerges while continuing the original story. The characters and the problems they deal with are realistic and their personalities are destinct. This is the type of story that keeps you pondering what happens next every minute until you pick it back up! Excellent read! I highly recommend the series!

a little slow to follow when it starts, but rapidly gets very good. his writing will keep u up at night.....

I literally savored this book like a turkey dinner with a fine wine and cinnamon apple pie for dessert! A man literally steps into the shoes of a mage in another world. He not only has to convince the natives of this world, but himself, that his magic is real. I think the constant thinking this character did is what really drew me to him. John Lyon is not a typical man. He investigates things fairly thoroughly and even when proof is staring at him, he's still making sure that it's really good proof. This character has got plenty of personality that's for sure. All the other characters in the whole book have personality too. Distinct individual personalities that are so well written they walk out of the page and present themselves to you.
Please see the full review at: http://ebookit.wordpress.com/2011/02/19/under-the-stairs/

I loved this book so much that I bought the rest of the series (those that are out so far) and I haven't been disappointed yet! What fun! I won't spoil it for you since you are going to be hooked! The characters are very real and down to earth. The plot is well developed and so unique! The story line is super. I want to visit this imaginary place just to take a look around! I highly recommend these books!

You have subscribed to Smashwords Alerts new release notifications for John Stockmyer.

You have been added to John Stockmyer's favorite list.

You can also sign-up to receive email notifications whenever John Stockmyer releases a new book.