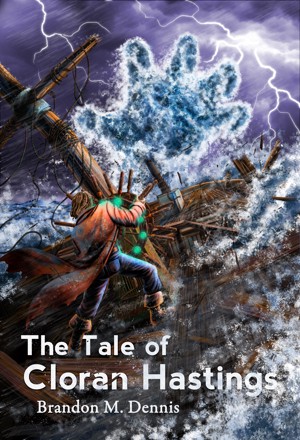 The Tale of Cloran Hastings

By Brandon M. Dennis
A wave of water in the shape of a clawed hand crashes onto the deck of Wavegrazer. The wheel spins violently; the ship lurches and Cloran's men are flung into the sea. As the masts break and the sky goes black, one name flutters across Cloran's lips. "Adaire...". More
Cloran has spent his life at sea and is set to retire. He hopes to marry his long-suffering fiancé Adaire, but his hopes are dashed when King Bozin sends him on one final journey to the far-flung icy island city of Miotes. This time, however, the Sea is jealous of Cloran, and will never give him up to Adiare freely, but he has no choice, and accepts the mission begrudgingly. "One final journey," he tells himself. No matter what happens, it will be his last.

Brandon M. Dennis is best known as his alter-ego Oxhorn, whose music and animated movies have been viewed by millions online. His most popular works are ROFLMAO!, the Inventing Swear Words series and music videos like Gnome Overboard, An Oxhorn Brand Medley and The Anti Elf Anthem.

Brandon comes from a family of commercial fishermen. The sea has had a stirring impact on his life and imagination.

Brandon completed his first fantasy novel, The Tale of Cloran Hastings, in 2004 while he was working on his degree. He graduated from The University of Washington with his BA in history, where he focused on ancient Greek history. He maintains an active and regular blog, Blogging with Class, hosts a weekly live show called Scotch & Smoke Rings, and releases news to his fans at Oxhorn Brand Movies.

Reviews of The Tale of Cloran Hastings by Brandon M. Dennis

You have subscribed to alerts for Brandon M. Dennis.

You have been added to Brandon M. Dennis's favorite list.

You can also sign-up to receive email notifications whenever Brandon M. Dennis releases a new book.