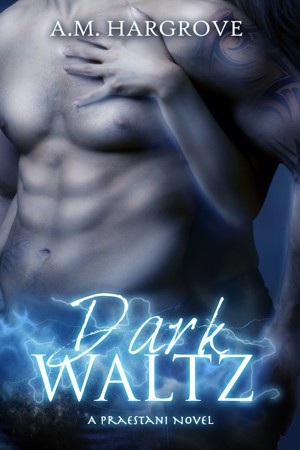 Liasare Davidson, desperately searching for her missing brother, suddenly finds herself in the arms of a mysterious, yet powerful stranger she can't seem to forget. Will he help her in her quest or plunge her into the depths of danger she never imagined? More
Category: Adult Romance…not appropriate for young readers due to mature content.
Dark Waltz--A sizzling legend of loss, lust and love.

It’s the year 2030 and the human population has been annihilated by a virulent form of small pox. Liasare Davidson is desperately searching for her brother, who has been missing for three months. It’s been eighteen years since she was evacuated from Earth and she is horrified to see it’s become a cesspool of unimaginable things.

In her quest to find her brother, she meets Jurek, a powerful and enigmatic being that frightens her, yet she is unable to resist. When things begin to unfold between them, they both discover a paralyzing truth that puts Liasare at grave risk. She must make a choice to join Jurek and find her brother or fulfill a role she believes she is ill equipped to undertake.
Download: epub mobi (Kindle) pdf more Online Reader
rtf lrf pdb txt
Price: Free! USD
Add to Library
Create Widget
Tags: thriller dystopia mystery suspense alpha male paranormal adult romance adult fiction scifi action adventure devils and demons
About A.M. Hargrove

One day, on her way home from work as a sales manager, USA Today Bestselling Author, A. M. Hargrove, realized her life was on fast forward and if she didn't do something soon, it would quickly be too late to write that work of fiction she had been dreaming of her whole life. So, she rolled down the passenger window of her fabulous (not) company car and tossed out her leather briefcase. Luckily, the pedestrian in the direct line of fire was a dodge ball pro and had über quick reflexes enabling him to avoid getting bashed in the head. Feeling a tad guilty about the near miss, A. M. made a speedy turn down a deserted side street before tossing her crummy, outdated piece-of-you-know-what laptop out the window. She breathed a liberating sigh of relief, picked up her cell phone, called her boss, and quit her job. Grinning, she made another call to her hubs and told him of her new adventure (after making sure his heart was beating properly again).

Other than being in love with writing about romantic suspense, she loves chocolate, ice cream, and coffee and is positive they should be added as part of the USDA food groups.

About the Series: The Praestani Novels

The Praestani Novels consist of the books, Dark Waltz and Death Waltz. Jurek and Liasare must defeat Abaddon in order to save the universe from the forces of evil.

Also in Series: The Praestani Novels

Reviews of Dark Waltz (A Praestani Novel) by A.M. Hargrove

You have subscribed to alerts for A.M. Hargrove.

You have been added to A.M. Hargrove's favorite list.

You can also sign-up to receive email notifications whenever A.M. Hargrove releases a new book.