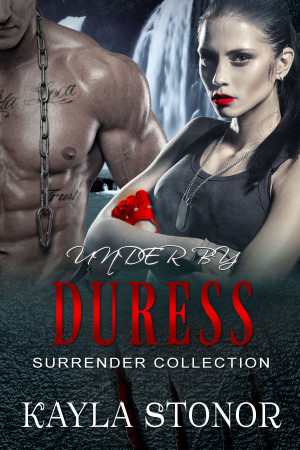 Rated 4.25/5 based on 8 reviews
Following a devastating break up from her ex Dom, Tahima has escaped to the Blue Ridge Mountains for some badly needed solitude. When a Mafia heir wanted for murder crashes into her life, she determines to turn him in. Her only option is to force him down the mountain to the local Sheriff's office – a mission fraught with danger. More
She caught him, now she has to turn him in.

Following a devastating break up from her ex Dom, Tahima has escaped to the Blue Ridge Mountains for some badly needed solitude. When a Mafia heir wanted for murder crashes into her life, she determines to turn him in. Her only option is to force him down the mountain to the local Sheriff's office – a mission fraught with danger.

Rossini's piercing gaze and commanding voice hits deep into Tahima's submissive nature. Her captive towers over her slight build, promising to be uncooperative. Armed with only a stun-gun, she fights against her submissive tendencies. To survive, Tahima must find a way to dominate Gian Rossini, a corporate millionaire and fugitive from justice.

Can a woman fight her submissive instinct? That’s what Kayla Stoner’s character Tahima, had to do when she met Dom, Gian Rossini.

They didn’t meet under normal circumstances. Tahima exiled herself in a log cabin in the Blue Mountains, after a disastrous relationship with another Dom broke her self-esteem, while Gian was running from the authorities due to the murder of his father and his ties to the mafia. On a precarious journey through the mountains, each learned the other’s role as dom and sub.

This short novella kept me in my seat and drinking plenty of cold glasses of water.

Having read the author’s short story ‘Horizon’, I was interested to see how Ms Stonor would perform at a novella. I was not disappointed.

Tahima Sheldon is busy renovating her grandfather's old lodge in the Blue Mountains for the next three months. She's only really beginning her work on the old lodge and hopes to make all the necessary improvements so that she's able to rent out the place. When she sees a small plane circling the forest near her lodge only to hear it crash a short time later. She goes to see if anyone is hurt. Seeing the lone passenger is relatively unhurt attempts to walk away but is stop short by velvety voice asking to make a radio call. Tahima hasn't heard a voice like this since her last dom Stephan betrayed her. Tahima wants to fall into that voice in a heartbeat but she won't let herself fall into that trap again. Gian Rossini is every inch the alpha male and dom that he presents himself to Tahima. He is trying to stay one step ahead of the law that is until he is confronted with Tahima's stubborn force of will. He tries to put Tahima at ease only find that she gets even more stubborn and trying her dominant tendencies on him. He's intrigued and stunned to find himself responding to Tahima's demands even if some of those are more like torture. They both survived the trip down the mountain where Rossini turned over to the police. Three months later, Tahima's career is taking off in a new direction which pleases her. She still thinks about Rossini sometimes. Rossini is free from the law but his heart isn't so free. Stephan unexpectedly shows up at Tahima's apartment where none of his intentions are good. Can Tahima get free of Stephan? Will Tahima see Rossini again? Can Rossini convince Tahima his feelings are geniune? Your answers await you in Under By Duress.

This is a brand new author for me and great start to a series of books that are definitely fast reads. I found that I could really relate to Tahima on a personal level thru all of her struggles mentally and emotionally. The range of emotion was completely astounding for such fast read book. I was intrigued by Rossini because he really wanted to help Tahima even though she didn't believe him at all or trust him. I felt that the torture elements were appropriate and not overly done either. There was just enough and no more which was fine by me. I'm definitely looking forward to the next installment in this series Under By Treaty.

I am being honest when I say initially I didn't know whether to award 3 or 4 stars...then I thought why 3? It is a good and enjoyable story, but I really had to suspend disbelief to accept the actions and behaviour of Tahima the female protagonist with Gian Rossini within the timescale given. Who in real life would want to jump the bones within 24 hours, of this good looking man who she thinks at that time is a New York mafia bosses son, who has killed his father, and he a well known Dom, whilst she is suffering emotionally from some really bad experiences with a lover Dom whom she had trusted and its hinted has done something awful to her that temporarily destroyed her?
Then I thought you have watched plays where suspension of disbelief made the play brilliant but wouldn't work in real life...so do the same with this story and I have to give it 4 stars for...
The physical and chemical attraction between Tahima and Gian that leads to some erotic scenes and within a very short time, but for Tahima with a difference. Her serious damage from past fiance and boy did I want Kayla Stonor, the author to write a detailed come uppance for that bastard...you failed there Kayla, sorry. We get a what will probably be. Readers enjoy detailed retribution against nasty antagonists, probably because of so much injustice in real life and it's good to redress the balance through creative fiction. I digress... the difference is Tahima finds herself switch role from submissive to taking control, power and Dommes over Gian with some physical discipline, even if it seems to be role play it is good for her self esteem. Gian Rossini, despite his connections and crime, not forgetting his nature as a Dominant male seems to be aware instinctively of this, yet allows her dominance and administration of painful controlling discipline to him, which he finds a turn on... surprise surprise. I know of people in real life this happens with, so it is plausible.
There is some good adventure and close calls on the survival trek. The Hank experience, humiliating, fearful, I kept saying zap the b****** now, now, come on, don't do this to Rossini...so I'm involved with the characters Kayla created, which is good.
The ending I saw coming but was glad. I could have cheerfully read the last scene to it's climactic end and felt a little deprived as I do when I read a HEA and they head off in the distance while nosy voyeur me wants to spy a little longer on their lives and story.
So the good outweighed the disbelief...and it is of a good literary standard and edited, hence I go for 4 stars overall.

This book is a new take on the opposing roles in a bdsm relationship. The author has used her characters to take you on a journey with her heroine. The author broaches difficult subjects with such flare that you will not be able to stop reading. I admire this book as it explores the female sexuality in a non judgemental way. To show a vulnerable female in a proactive way is difficult in this genre. As most books of this genre only show submissive behaviour. Which we all know is not realistic. I look forward to reading your next book as you have a fresh approach and look forward to the next heroine whoever she may be.

She ends up with a mob boss on her hands, his plane wrecked just outside her cabin. She bravely turns the tables on him with a Taser, cuffs him up, and they’re off. Gotta run, bad guys are on their way. Their two day trek through the wilderness is the journey of an Alpha male domme learning to submit to her complete control of his every moment. He resists her guidance, but at the same time works his way under her skin and into her heart.

The girl has some serious emotional baggage, a former submissive who was taken for a ride, utterly abused. But now it’s her turn to become a domme. Role reversal. She has a little too much fun with that Taser, learning where it hurts most.

However once consent has been negotiated there's a sense where the work (and the violence) becomes far more playful, and I was able relax and enjoy the developing relationship between captor and captive. The author is masterful at exploring intimate interactions in extreme settings. The props like pitons, ropes and a rambling bear were cleverly employed; the scenery is terrific and well used.

I feel this author has a solid future in interesting, well-developed, multi-themed erotica.

This is a non-con story which definitely turned into dub con. Tahima is a submissive who's been burned badly. She's also a switch, which is interesting. While Tahima is doing her best to get over her heartbreak of trust broken, she literally runs into Gian. Gian is a mafia son's boss on the run and an alpha male to boot.

You have subscribed to alerts for Kayla Stonor.

You have been added to Kayla Stonor's favorite list.

You can also sign-up to receive email notifications whenever Kayla Stonor releases a new book.