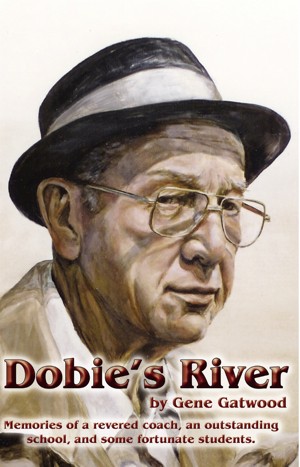 Should be a "MUST" read for prospective college students; especially Chapters 37(A Georgia Tech Obstacle,) 38(The Yellow Jacket Overwhelms,) and 39(First Quarter Grades.)

An easy, informative read about young men and women during their first years of college life, including certain amounts of sex, destruction and rejection of authority. Overall theme is Churchill's quote, "Never, ever give up!" More
ForeWord.com Critique of Dobie’s River
(Rated 4 out of 5 stars)

Human value is truly measured in the gifts one bestows on others; be it love, consideration, or wisdom. The late Coach Thomas Dobie Holden’s worth is painfully and lovingly recalled in the memoir, Dobie’s River.

The early college years of Pearl River Junior College football players is retold in this coming of age story set in Poplarville, a small town in southern Mississippi. Jeb Jackson is a 130 pound, five foot six inch high school dropout who has decided his educational and vocational future hinges on scoring a football scholarship at PRC. After several failed phone calls to Coach Holden, Jeb shows up at the coach’s office to plead his case. Unfortunately, Jeb’s bravado is met with more rejection. With a little help from his brother and another display of courage and passion to play, Jeb not only gets the opportunity to tryout, but becomes a part of the PRC Wildcats.

During his three years at the school, Jeb befriends some of the top players on the team, including Tim Mallory and Jack Hebert. The boys share many experiences including sexual escapades with several girls from and around the campus, two shootings, a barrage of injuries on the field, dorm room pranks, heartbreak and the unyielding wrath of Coach Holden. Holden was famous in his region and beyond for his thorough knowledge of football, his skill at developing plays that would confuse and disable competitors, and his strategic use of psychology to mold and master his young players. What the coach gave his charges in great abundance was wisdom the young men carried into adulthood: “…you must be flexible and ready to adapt to changes or you may never realize your full potential.

Gatwood played under Coach Holden from 1958 to 1960 as a quarterback and received his associate’s degree from Pearl River Junior College. The author’s creative nonfiction style of writing centers on dialogue that moves the story forward and endears the reader to the characters. Although the action is occasionally stymied by a look into the backgrounds of supporting players, Gatwood’s skill in describing plays on the football field pulls the reader back into the story. The author has a habit of repeatedly providing the phonetic spelling of every Cajun character in the book: “Alphonse Le’Fontenot (Lay-fun-to-know)”; however, it is his dedication to detail that makes this book perfect for an audience looking to re-live the struggles and successes of early adulthood.

Dobie’s River is an entertaining look into the youthful days of insecure, talented college boys who were influenced by a fiery, brilliant coach through their development into adulthood. The author’s effort is reflective of one of Coach Holden’s sage sayings: '…the real secret to success in this business, or any other endeavor you might undertake, is finding out what people do best and lettin’ ‘em do it."

Dobie's River is full of action and youthful never-say-die drives to achieve and succeed. Though the setting is centered about the legendary coach and football, a reader does not have to be a football buff or understand the game to enjoy the book. Why? Because it is written about people, not about the intricacies of football.
Available ebook formats: epub mobi pdf rtf lrf pdb txt html
First 20% Sample: epub mobi (Kindle) lrf more Online Reader
pdb
Price: $2.99 USD
Buy Add to Library Give as a Gift
How gifting works
Create Widget
Tags: romance inspirational memoir coaching epic teenagers college football comical humorous young adults easy reading
About Gene Gatwood

Eugene (Gene) Gatwood played football for Coach T. D. (Dobie) Holden at Pearl River Jr. College (PRC); Poplarville, Mississippi for three years, 1958, 1959, and 1960. After receiving his associate degree from PRC in 1960, he attended the University of Southern Mississippi (USM); Hattiesburg, Mississippi where, in 1962, he received a Bachelor of Science degree in Math.
After graduating, Gene joined the Air Force. During his military career, among other assignments, he served as the commander of a 165-man Communications Squadron at Phan Rang Air Base, Republic of Vietnam in 1971-72. Later, he attended Troy University; Troy, Alabama where he obtained a Master’s degree in 1976. He later commanded a 535-man communications group at Robins AFB, Georgia. Gene retired from the Air Force in 1982 and taught electronics, math, and introduction to computers for more than 21 years at Middle Georgia Technical College, located in Warner Robins, Georgia. During this time, he earned an Educational Specialists (EdS) degree from the University of Georgia; Athens, Georgia in 1986.
Gene married Georgia Annie Jackson on June 9, 1966. They had two children: Stacy Leigh Vaughn and Jubal “Stonewall” Jackson Gatwood; and five grandchildren: Simon & Grey Vaughn; and Riordan, Audrey and JJ Gatwood. Annie and Gene lived in the Vinings area of Atlanta, Georgia. However, at 3:16 pm, on May 29, 2014, with family members crying and praying by her Northside Hospital ICU bedside, Annie's soul eased out of its earthly body and journeyed to be with Our Lord and Savior, Jesus Christ. She and Gene had lived together as husband and wife just shy of 48 years during which she had been a wonderful wife, mother, grandmother, sweetheart and partner. It has been difficult for Gene learning how to live without this sweet, loving little girl whom God blessed him with for so many years. He prays that one day The Lord will allow him to join them in Heaven.

You have subscribed to Smashwords Alerts new release notifications for Gene Gatwood.

You have been added to Gene Gatwood's favorite list.

You can also sign-up to receive email notifications whenever Gene Gatwood releases a new book.