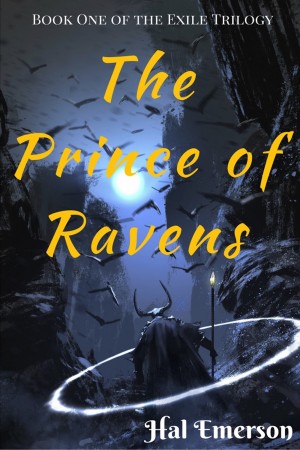 The Prince of Ravens

By Hal Emerson
Rated 5.00/5 based on 3 reviews
The Prince of Ravens has known nothing but privilege and power - until the day an attempt is made on his life. Now he must flee across the Empire he once helped to rule, searching for answers and running from those who would have him silenced forever. He, the Seventh Child and prophesied Lord of Death, has been Exiled, and the Empire will stop at nothing to keep him from his destiny. More
The Prince of Ravens has vanished.

Word spreads quickly from the Fortress of the Empress, through the dark streets of Lucien, and to the far corners of the Empire of Ages. The Children are summoned to the Fortress, and the people talk in muffled whispers, if they dare to talk at all, of secret plots and ancient prophecies. Some say the Prince was murdered, others that he was kidnapped; but underneath it all runs a darker word, one full of terrifying possibility:

Hal Emerson was born and currently lives in the San Francisco Bay Area, where he works as an author and English teacher. He graduated from UCLA with a BA in Theatre specializing in Shakespeare. He has an undying obsession with raspberries and dark chocolate.

Reviews of The Prince of Ravens by Hal Emerson

I had to come back and give the stars rating for this book because it deserves it and more!

(review of free book)
Barbara Bretana reviewed on March 1, 2015
(no rating)
I've read a lot of fantasy and adventure and I simply could not put this one down. I stayed up all night to finish it and it's made me ravenous for more. I would give it six stars if I could. I love the character of Raven, he is very well written as was the whole story.

If reading is anything like eating, then you could have heard the “nom-nom-nom” sound while I was stuffing myself with this yummy mix of epic and fairy tale-ish fantasy, flavoured with characters, that I want to hug and hit very hard in the same time.

I have to say, the way the annotation was set, I thought the story would start a little differently. But once I got into the book, it doesn't really matter, as it just sucks you right in.
The main lead, the Prince of Ravens, is an awesome character. And I don't just mean the cool powers of the Raven Talisman – he just was so believable in the way he acted, thought, spoke and felt. The way he felt about his mother and about the Kindred. His undying loyalty for the Empire and his despite for everything and everyone that opposes it. Yup, it was so frustrating worrying about him, that he would do something so amazingly stupid AGAIN and he kept me on the edge the whole book. But it was how things are really supposed to be. One can't change his heart and mind over night, and this is why it was so good reading about his struggles.
Tomaz and Leah, the Ashandel and Eshendai pair (by the way, love the sound of it) are sweethearts too. Well, especially Tomaz – only hugs for him, but still some kicks for Leah. I really enjoyed each and every moment with Tomaz and Raven, especially the ones over the fire, and in the end of the final battle. I just have a soft spot for big brother/father figures, and Tomaz was just perfect. I am not sure I liked how in the end his debt was revealed – true, it was really important for the plot.... but I am sure that even if it wasn't for his past debt, Tomaz would still have believed and cared for Raven.
Leah was quite cool too, tho I had the feeling sometimes, that she and Raven didn't really act their age, but more like small children. However, I'm aware that is far more often and believable for grown ups and teens to act childish than vice versa. And I can't deny that it was fun to read :D Still... I would love some romance next time :D
The story is set in the land of Lucia, ruled by the immortal Empress. One could say that there are many details that sound almost like a cliché – the evil queen, the seven children, the youngest son, the city in the dark, prophecies, heirs and so on. But all of this just makes it more fairy talish for me and I love my fair share of fate ans symbols now and then. And it is also mixed with so much awesomeness – like the Talismans, the bloodmagic, daemons and Children and everything. I was absolutely in love with the idea of the seven Talismans from the very beginning and it was cool that by the end of the book we got to know so much more about them – and surely more is to come.
And the battles were epic – really this book here can proudly be called “young adult epic fantasy”.
Last – but not in importance – the fun :D I love to laugh when I read and if a book managed to make me do bought while going through the pages, then it was most likely awesome. There were so many moments that made me giggle, but if I have to pick my favourite ones... that would be Raven's dreams. I don't know why, but the “he could have pet eagle if he wanted” and the pouty, stupid looking cloud made me laugh so hard. I hope there are more of the Prince's dreams to come in the next books!

Overall, The prince of Ravens was awesome. It was a fast read, simply because I enjoyed it so I couldn't let go. Extremely well deserved 5 stars.