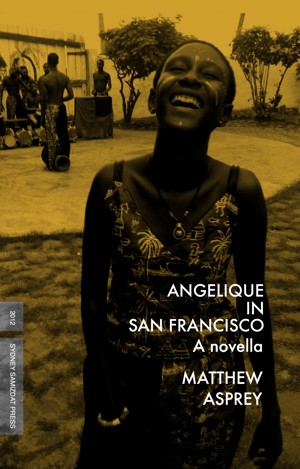 Angelique in San Francisco (a novella)

By Matthew Asprey Gear
Rated 3.50/5 based on 2 reviews
Set entirely at night in a repressive atmosphere of Patriot Act paranoia, Matthew Asprey's 2012 novella 'Angelique in San Francisco' dramatizes a young woman's quest to discover her heritage. More
Angelique, a young Australian backpacker, travels to San Francisco for the world's first Festival of Dhaban First Wave Cinema. This film movement briefly flourished in the West African nation of Dhaba between 1969 and 1974, a period of creative freedom between repressive dictatorships. Adopted at birth to Australian aid workers, Angelique is in fact the daughter of Jean Bouchard (a French director and mentor of the movement) and the beautiful Dhaban actress Nafissa N’Diaye.

Angelique is in town to learn what she can about her long-dead parents. The festival is the stepping stone to an eventual Criterion Collection boxset, and others have come to San Francisco to fight for what will constitute the canon of the Dhaban First Wave: Miles Skarpås, Swedish academic and festival curator; the bitter 'Colorado Kid', once tortured by Dhaban security forces and now independent historian of the movement; and Souleymane Foumo, one of the original Dhaban directors who escaped the tragic fate of his colleagues for success in French television.

Set entirely at night in a repressive atmosphere of Patriot Act paranoia, Angelique in San Francisco dramatizes the ironies of canon-formation and a young woman's quest to discover her heritage.

MATTHEW ASPREY GEAR is an Australian writer. His book 'At The End of the Street in the Shadow: Orson Welles and the City' is now available from Wallflower Press/Columbia University Press.

He is one of the founding editors of Contrappasso Magazine. His work has appeared in the Los Angeles Review of Books, Senses of Cinema, Bright Lights Film Journal, Crime Factory, PopMatters, Island, Extempore, and Over My Dead Body! Many of his novellas are available in chapbook and ebook formats. In 2011 Matthew Asprey Gear graduated with a PhD in Media Studies at Macquarie University in Sydney. He has lectured on cinema and creative writing.

Some of his work is published under the name Matthew Asprey. It’s all his.

Very readable, and not amateurish, as I feared it would be because it is a free book. I would have liked more story, and less lists of films... although those lists might have contained clues that I was too lazy to decipher. I was left, at the end, wanting more. "Don't judge a book by its cover" is an axiom that applies here. It was not an account of a lighthearted little adventure with a happy ending.

This is an intriguing development in the author’s oeuvre. It is not quite travel fiction in the sense that it is strictly about travel. Rather, the sites, destinations and intimate yet simultaneously unfamiliar settings act as a peripheral counterpoint to the story. And that story seems to be about one’s identity through heritage, or lack thereof.

The presence of little-known Anthony Burgess pseudonym Joseph Kell, having previously appeared in Asprey’s Red Hills of Africa, adds not only a touch of literary nostalgia but also the kind of historical experimentation that provides depth to an otherwise light-hearted work. The lead character, Angelique, may not be as developed as the meticulous storyline is, yet the breadth of detail in each other facet of the story covers it nicely. Just like Sonny’s Guerrillas, Asprey injects stories of political upheaval to give the work a sinister edge.

Like Asprey’s previous work, the story exists as an amorous example of literary foreplay, with undercurrents of sexual frustration and playful amateurism. As many novellas do, I am left waiting for more, though am given a refreshing taste of ambiguity that sates my curiosity. The work, like Angelique’s ultimate grasp of her history, is somewhat incomplete though satisfying at the same time.