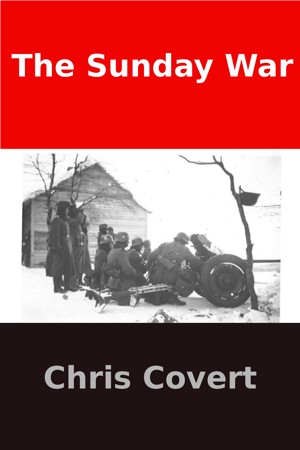 By Chris Covert
A Russian colonel and a German sergeant cross the lines of war to rescue the colonel's family trapped behind enemy lines in the winter wastes during the WWII Battle of Moscow.

The Sunday War is the story of Sergei Zalovskiy, Nadezhda and little Clara as an internal war and then a Sunday war threatens their very existence, until an act of kindness committed by a German soldier. More
The Sunday War chronicles the lives of a German soldier and a Russian family starting in 1933 with the rise of Hitler in Germany and the start of the Great Terror in the Soviet Union, as author Robert Conquest termed it.

Industrial crane operator Herman Heitz is impressed into a military security unit near Munich after he tries to learn the fate of a Jewish supervisor, who was whisked away by the new Nazi regime in 1933. Rising to the rank of sergeant, his unit unwittingly provides security for an SS unit in 1941 as SS soldiers conduct pogroms against Russian Jews in eastern Poland and later White Russia, then provides anti partisan hunting support before transforming into a desperately needed antitank gun battery.

Sergei Zalovskiy is a member of the elite NKVD, who finds himself imprisoned in Siberia in 1937, then released in time to face the German onslaught in June 1941. He is assigned as a rifle division commander to battle the German Army in southern Russia as well as the NKVD, before gaining an assignment which takes him into his hometown, where is wife and daughter may be trapped.

Chris Covert currently lives in Oklahoma City and writes Mexican Drug War and national political news for Rantburg.com and BorderlandBeat.com. His articles have also appeared on FrontPageMag.com, TheTruthAboutGuns.com and NewsRealBlog.com

Chris has written sports and business news for Oklahoma daily newspapers. He has also worked as a mechanic, a machinist and a bookkeeper, and has been self employed.

Chris Covert was born in Tulsa, Oklahoma in 1954. He served briefly in the US Army as a tank driver. He holds a Bachelors Degree in Journalism from the University of Central Oklahoma.

Chris is currently writing his third novel, set in Tulsa, Oklahoma in the mid 1980s. His latest non-fiction work is tentatively scheduled for release late 2013 to early 2014.

Reviews of The Sunday War by Chris Covert

You have subscribed to alerts for Chris Covert.

You have been added to Chris Covert's favorite list.

You can also sign-up to receive email notifications whenever Chris Covert releases a new book.