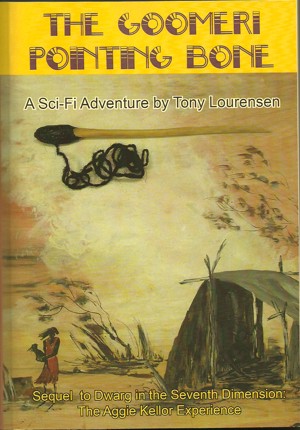 The Goomeri Pointing Bone : Sequel to Dwarg in the Seventh Dimension

By Tony Lourensen
Dwarg is reunited with his host Aggie. Aggie has grown and has found a lover. Trouble with mysterious disappearances of some of her people in Algeria takes the reader on a rollercoaster ride of intrigue and spiritualism where Native American Shaman meets Australian Aboriginal Ngangkari and the puzzle is finally solved in a little township in Southeast Queensland called Goomeri...or was it? More
Aunt Edna becomes Shaman for the Northern Nations and is presented with several quests including a convoluted call for assistance from the spirit of a Australian Ngangkari. Professor Lien, working in the Sahara Desert, has disappeared, so did a rescuer looking for him. Prof Lien turns up in the outback of Australia - Aggie and Dwarg try desperately to find out exactly what happened. Aunt Edna's spiritualism and mystic insights also become involved in these mysterious events and she resolves to travel to Australia to sort it all out - she does...yet there is still something not quite finalized in Aggie's scientific mind.
This is a sequel to Dwarg in the Seventh Dimension and one will meet new and delightful characters.
Download: epub mobi (Kindle) pdf more Online Reader
rtf lrf pdb txt
Price: Free! USD
Add to Library
Create Widget
Tags: aboriginal sci fi native american sci fi pointing bone sci fi mysteries
About Tony Lourensen

I was a boat person who immigrated to Australia in 1952. I wasn't called a boat person then, I was called a wop, dago, spick and wog and not all that welcome by the average Australian - seems I was a threat, in that I was here to steal their jobs and their women, a hard task at age 6. I came home from my first day at a Newcastle school with bruises on arms, legs and buttocks, compliments of the teacher who was angry that I did not know the words to GOD SAVE THE QUEEN. Fifteen years later, I found myself in a hole in the ground, in the middle of a war, in the middle of South Vietnam. I had my life on the line, protecting the country which did not want me. I was now an Australian soldier - and I reckoned Australia was worth fighting for. One doesn't need true-blue blood to be an ANZAC.

Also in Series: Dwarg in the Seventh Dimension 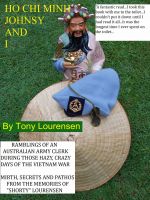 You have subscribed to alerts for Tony Lourensen.

You have been added to Tony Lourensen's favorite list.

You can also sign-up to receive email notifications whenever Tony Lourensen releases a new book.