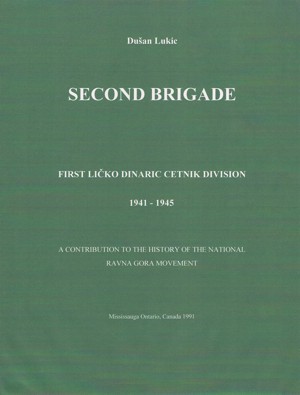 By John Lukich
This book was originally written in Serbian by my late father, Dušan Lukich in 1991, and describes the events that occurred in the Tromedja area of the former Yugoslavia during World War 2. This book serves as an historical document of that time and sets the record straight regarding the role of the Četniks, Ustasha, and Communists in this region of the former Yugoslavia. More
This book was written by my late father, Dušan Lukich, in the late 1980s and early 1990s and published during 1991. It was a massive project for my father but one he felt compelled to complete for, as he states in the book, the truth about events in the Tromedja area of the former Yugoslavia during WWII needed to be told. As important, he wanted to ensure that the names of those who suffered, fought and died during that time, in that part of the country, would be remembered for their sacrifice. Therefore, the book is not a story about him as much as it is a historical reference document. The victor, it is said, gets to write history, and many have done exactly that with their selective and varnished versions…all the more reason for my father to have written a book containing truths from someone who witnessed firsthand, the actual events that took place during that point in time.

The book was originally written in Serbian Cyrillic using a Cyrillic typewriter for each of its 335 pages. I translated this book and did not attempt to update it in anyway (other than adding a map at the end of the book) so it is important to keep in mind that it was originally published in 1991 and many events have taken place in the former Yugoslavia since then. However, this does not effect the historical aspect of this book describing events during World War 2.

This eBook is not a word-for-word translation although it is close. I recognize this eBook would not be considered an official translation by the literary world. And no doubt those whose mother tongue is Serbian will see nuances in the original text that were not captured in the translation. For errors and/or omissions my apologies; I am confident, however, that the English version is a fair reflection of, and honest representation of the original book.

I thank my late father Dušan (January 3, 1917 – November 27, 2006) for writing this book and I hope that those of you who read it will further appreciate the sacrifices of the Serbian people who lived through the horrors of the Ustasha and Communists. As well, I hope that you will have even greater respect for the Četnik fighters of Draža Mihailović - who bravely fought against all odds not for territorial gain or power, but rather so that the Serbian people – their nation, religion and customs - would not be wiped off the map in the Tromedja area of Lika and elsewhere.

You have subscribed to alerts for John Lukich.

You have been added to John Lukich's favorite list.

You can also sign-up to receive email notifications whenever John Lukich releases a new book.