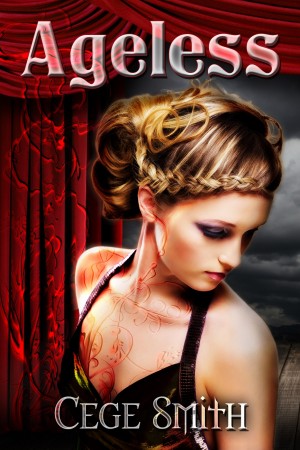 By Cege Smith
Rated 5.00/5 based on 3 reviews
An epic adventure begins in this YA paranormal romance that sheds new light on the origins of the vampire myths... More
Immortality. It is a cursed fate for those who possess it as it comes with a steep price that must be paid for in blood.

A chance invite to a popular student's intimate house party on the eve of high school graduation opens Violet Ward's eyes to a world she never knew existed. The vampires of myth are real, and she learns that getting tangled up in vampire business can lead to painful, bloody ends.

Jeremiah and Jonah Montrose are two brothers on a mission spanning a thousand years. They need Violet's help, but first she has to accept and be accepted into their world. Violet soon discovers that the mysterious Montrose brothers aren't the only ones seeking her out.

Surrounded by danger, she has to decide who she can trust as one thing becomes clear. There is no escaping her destiny. Violet holds the key to unlocking the truth of an ancient myth, one that promises the answer to a curse-free immortality, but only if she lives long enough to turn eighteen.

This is a standalone novel that introduces the characters in the upcoming Immortal End series.

Everyone loves a good origin tale. Cege's started when she was eight years old. She snuck out of bed late one night and into the living room to watch TV. Flipping through stations with the volume turned down low, she came across a rerun of a movie called The Exorcist. She was terrified yet mesmerized.

Cege wasn't unfamiliar with the idea of the battle between good and evil. She attended Catholic school in a small town in rural Wisconsin, and at the time knew the 'age appropriate' stories from the Bible. Nothing in those stories prepared her for the visual onslaught of watching the battle between the priests and the demon for the soul of the young Linda Blair. Cege was deeply disturbed by the movie, but nonetheless a seed was planted that night. That seed grew into a rampant fascination with all things supernatural.

Sleepovers turned into B-rated horror film marathons. Her library card was used to bring home piles of books about ghosts and vampires. She still isn't quite sure who she loved first, Stephen King or Freddy Krueger. By the time she was twelve, Cege took a turn at penning her own spooky tales. That love of things that go bump in the night and scare you to death has only grown stronger throughout the years.

The paranormal and supernatural take center stage in all of Cege's stories. Over the years, she has crafted her own origin stories about vampires (the Bloodtruth series), zombies (the Twisted Souls series), and ghosts, angels, and demons (the Shadows series). She's also taken on the folklore around the Fountain of Youth (the Immortal End series beginning with Ageless). There is something for every reader of the paranormal in Cege's books.

I truly enjoyed this book. Gives a good description of the friction between vampires and witchs/warlocks. Very good paranormal with some of the reasons why vampires are the way they are. Looking forward to more stories in the series.

Excellent book and a very interesting take on vampires and the paranormal. Definitely not your ordinary book. Cannot wait for a second book and I would highly recommend this to anyone who loves paranormal/supernatural themes in books!

(reviewed 22 days after purchase)
Melanie Naugler reviewed on on Jan. 9, 2013

was an enjoyable read, I couldn't put it down. I wished it didn't have to end. Hoping there will be more books in this series.

You have subscribed to alerts for Cege Smith.

You have been added to Cege Smith's favorite list.

You can also sign-up to receive email notifications whenever Cege Smith releases a new book.