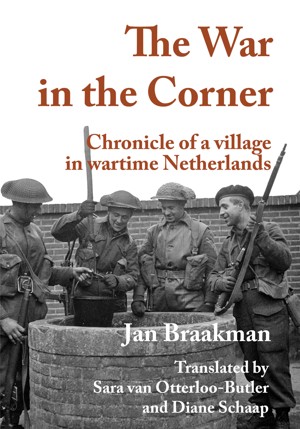 War in the corner: Chronicle of a village in wartime Netherlands

By Jan Braakman
The betrayal and subsequent death of Jan Braakman’s grandfather during the Second World War is the thread tying together this story of the Dutch village of Laren near the German border. Daring acts of resistance by locals aided the Dutch, the Jews, even Germans, as well as allied soldiers who marched through Laren on their way to liberate the Netherlands. More
Mark Zuehlke, author of the Canadian Battle Series, writes of this book,

“Jan Braakman's War in the Corner offers an insightful, dramatic, and evocative examination of the experiences of one small Netherlands community during World War II. The stories of resistance patriots, German sympathizers and agents, people who hid Jews and downed Allied airmen are rendered in compelling detail, but so too is the story of more ordinary citizens who sought only to survive an extremely difficult time. Braakman's journey into the past to understand what happened to his family and hometown of Laren during the occupation and subsequent liberation by Canadian troops is a story that resonates.”

In 1949, the London Free Press reported on the presentation of the King’s Medal to a local hero, Dutch immigrant Albert Jan Koeslag. Five thousand people converged on Durham, Ontario, in 1949 to witness the event. Koeslag had been active in the Dutch underground during the war, and along with his son Appie, had been decorated in the Netherlands by the Allied Forces before he emigrated to Canada. Now a Dutch journalist tells their story, along with the story of their village and the Allied Forces who liberated it, written as a "brutally candid" view of the personal side of war.

The Dutch resistance and the Allied Forces in the Netherlands, particularly Canadian soldiers, figure substantially in The War in the Corner. The book tells us how Koeslag and his son earned their medals, and describes the war-time life and liberation of the Koeslag family and their circle of villagers from Laren, in eastern Netherlands.

Jan’s mother was one of Albert’s nieces; Jan’s grandfather died in a concentration camp just as the war ended, and his grandmother died during the liberation of their village. The tale of Jan’s journey in researching and writing the book is therefore particularly poignant, but the writing itself is almost clinically objective. It connects local village life with the liberation of Canadian troops, making this book a memorial to the effects of war.

Jan Braakman (b. 1960) is a Dutch investigative journalist. He is the author of the Tegendraads and Klein Nederland (in Dutch) and co-author of Die jüdischen Gemeinden in Borken und Gemen (in German).
He began his career at the city newspaper Deventer Dagblad and later became senior reporter at the agricultural daily Agrarisch Dagblad.
He has reported about a wide range of issues, from agricultural world trade policy to animal disease crises. Jan has interviewed influential politicians, international farm leaders, European commissioners and national ministers.
As an author Jan specializes in regional stories in a historical context. His debut as an author of full-length non-fiction came with Tegendraads, the story of a self-willed farmer who was fatally shot by a policeman in 1949. The death of the farmer shocked the local community, not the least because he had been a war hero during World War II.
The War in the Corner is a revised version of Jan’s book Klein Nederland, which was first published in Dutch in 2010. For this book Braakman examined hundreds of dossiers in regional and national archives in the Netherlands, Germany, the United Kingdom and Canada. He interviewed dozens of sources who were close to the events during World War II. During his research he finally discovered the truth behind the arrest that led to the death of his grandfather in 1944 in the concentration camp, Neuengamme, near Hamburg.

You have subscribed to alerts for Jan Braakman.

You have been added to Jan Braakman's favorite list.

You can also sign-up to receive email notifications whenever Jan Braakman releases a new book.